SHERLOCK -The Reichenbach Fall & Beyond 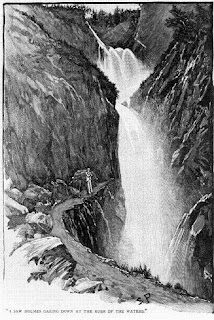 How Sherlock faked his own death will seem absurdly simple once it is explained.The internet is abuzz with theories, teasingly invited by the BBC series writers who blog and twitter of a missed vital clue. All good publicity to whet appetites for the proposed series 3.

This post will offer no theory: I have none. Rather my interest lies in two areas neglected by comments I have read.

I want first to record specific elements in "The Reichenbach Fall" episode that will require satisfying resolution however The Empty House of Series 3 is to be furnished. A seperate post will consider what may lay beyond The Fall.

Resolution please of these issues:

Viewers saw Jim Moriarty shoot himself in the mouth. Unusually for Sherlock, he made no examination of the body. Thereafter, no reference is made to a body found on the roof of Bart's hospital either in the episode or the mock-BBC Breakfast to be viewed currently on the official John Watson blogsite. No equivalent here to the letters of Col. James Moriarty seeking to clear his brother's name mentioned by Doyle's Watson.

Sherlock in the Graveyard.

To ask how Sherlock knew of John and Mrs. Hudson's pilgrimage to his grave is to miss the point. He watches them unseen...and undisguised. The scene is symbolic: Sherlock lives on to watch over us. John must not know of this for the time being. We shall need to understand just why the faked death and subsequent disappearance were so necessary.


Molly and the Staff of Bart's Hospital.

We see nothing of Molly during or after the rooftop encounter. Just what Molly did and knew will require credible explanation...as will the apparent ignorance of young Stamford and Bart's employees of a dead body on the roof.

The Homeless (or Baker Street Irregulars).

Just what is 'the word on the street' concerning the death of their former employer?


Lestrade, the Yard and a Police Investigation.

We leave Series 2 knowing nothing of the police investigation into the death of Sherlock, let alone the man on the roof.


All 'dogs in the night'...curious incidents the writers will need to embrace however they take the narrative forward.

Finally for this post: two matters bridging to my next post which will consider how "Sherlock" may develop.


Dramatically speaking, how long will Sherlock remain "dead" to the world?

Conan Doyle's Holmes spends 3 years travelling incognito or under aliases.
The first two are spent in Tibet as guest of the Head Lama. He then goes exploring as the Norwegian 'Sigerson', compiles reports for the Foreign Office and, latterly, works as a chemist in Montpellier, researching coal-tar derivatives.


So: what will Sherlock have been doing? For how long? Intriguingly, the inevitable episode equivalent to Doyle's "The Empty House" is delayable.
And it would be interesting to watch John making a life by himself ...and Sherlock surviving, planning...preparing.And both of them naturally changing in the process.


The Fall and Expulsion from Eden.

I was fascinated by references during the final and earlier episodes to the Original Fall of the Bible.


The rooftop encounter has shades of the Temptation of Christ. 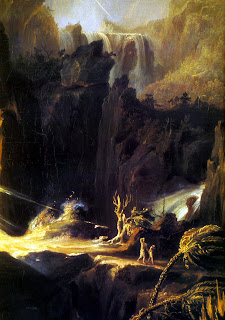 Appropriately, then, I end this post with Thomas Cole's 1827 painting, "Expulsion from Eden" and the final lines of Book XII of Milton's "Paradise Lost".


"Some natural tears they dropp'd, but wip'd them soon;
The world was all before them, where to choose
Their place of rest, and Providence their guide:
They hand in hand with wand'ring steps and slow
Through Eden took their solitary way."