"Gentlemen," he cried, "let me introduce you to the famous black pearl of the Borgias!"

This is the third of four posts discussing aspects of Sir Arthur Conan Doyle's short story The Final Problem. Click the titles to link to previous posts.

Smashing the sixth bust, purchased from Mr. Sandeford, 'with a loud shout of triumph, (Holmes) held up one splinter, in which a round, dark object was fixed like a plum in a pudding'. (SIXT). 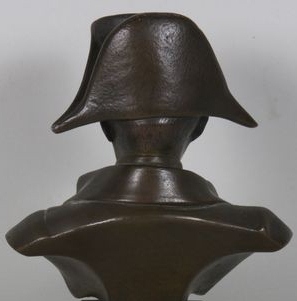 In the 'pudding' that is The Final Problem Conan Doyle's  'plum' is Professor Moriarty.

This post is a commentary on the language and techniques through which Doyle conjures the presence of Moriarty and because his Victorian readership was as ignorant of the Professor's existence as are Watson and Lestrade of the Borgia Pearl, what follows is best read by setting aside all you, dear reader, know about Moriarty.

(N.B. Please follow a copy of the text. My comments refer constantly to its language and structure. A convenient online FINA will open in a new window by clicking HERE. )

1. "TIME PRESENT AND TIME PAST".
Two passing, but clearly significant allusions are made to Moriarty in Watson's opening paragraph which are left hanging in the air as the good Doctor launches the narrative proper.

In 1893, two years after 'that event which has created a void in my life', letters have appeared in the press in which a certain 'Colonel James Moriarty' defends 'the memory of' his nameless brother. Watson considers these a public 'perversion' of the original facts, hitherto but sparsely reported in 1891. He has reluctantly taken up his pen to correct the record and this initial statement of intent closes with the first direct Canonical mention of Professor Moriarty.

There is already much here to occupy the Sherlockian who would debate reasons for James Moriarty's two-year silence, the paucity of newspaper reports (given Holmes's fame), the supposed contents of the Colonel's letters and the nature of that brotherly relationship. These do not concern me here. I am commenting on the unfolding of an imaginative narrative as experienced by Doyle's readers. Thus caught up and carried along such speculations do not naturally occur in media res.

At the opening of any story the reader is simply wondering Who? What? Where? When? And what Conan Doyle does here is to drip-feed the reader with morsels of information that arouse curiosity and shape response.

Denied for the moment any expansive detail we pick up on subtler hints ( as the writer fully intends). So, there is a strong sense of distance in time and place. Whatever the event, it happened years before and ("The past is another country" as L.P. Hartley opened 'The Go-Between') seemingly abroad, given the Geneva and Reuters communiques.

And, once upon a time, in another country, something momentous occurred involving 'Professor Moriarty and Mr. Sherlock Holmes'.

Professor distinguishes this Moriarty from the Colonel but more importantly imparts to the pairing of these two names an equality, a fatal twinning, a balance that Shakespeare deploys with Romeo and Juliet and (with more disquieting analogy) Robert Louis Stevenson in  'Dr. Jekyll and Mr. Hyde'.

With no experience or knowledge of Professor Moriarty, we note the new, strange name (never before encountered in the stories) and the one sure deduction - that a professor is always intellectual. Sherlock Holmes's powers (with which we are so familiar) readily bleed across to colour the empty silhouette of this apparent equal and the significant placing of their yoked names as the last words of Watson's prologue engender a sense of some legend in the making.

What follows is a transitional paragraph that rewinds with growing immediacy to 1891. The shift is from heavy-hearted meditation, transmuting through dynamic narrative to full recreation of the past in direct speech.
Before re-calling the moment Holmes walked into his consulting room on the 24th of April, Watson reinforces the sense of distance already established. The Morstan marriage and Holmes's absences abroad have distanced the friends. As Watson represents the reader in these stories, we too are thus estranged from the detective and share the doctor's pleasure when Holmes appears out of the blue.

But this is a paler, thinner, fearful and haunted Holmes in imminent mortal danger, bleeding from recent violent attack. The homely security of London and 221b count for nothing in the face of palpable peril. All must be abandoned and refuge sought precipitously elsewhere.

Holmes's understatement ( 'I have been a little pressed of late') and his courteous plea ( 'Might I trouble you for a light?') emphasise the enormity of a crisis as yet undescribed. There is ominous substance in the vagueness of 'You are afraid of something'  and 'It's not an airy nothing'.


2. WE ENTER THE LABYRINTH.

Suspense and surprises sprung upon Watson and the reader have animated these introductory paragraphs so irresistibly that, as Holmes now effectively speaks (posthumously) as narrator, attention is commanded just as it was in life. What ensues reads like some legendary exploration and momentous revelation of the Unknown, moulded in three classical movements: a sketchy, incomplete history of the shadowy Professor; the detective's unique knowledge of 'an antagonist who was my intellectual equal', tracked right to his hidden lair; and the equally unique, surprise confrontation of two Titans in Holmes's own inner sanctum on Baker Street.

At the outset Watson is ignorant even of the labyrinth: 'You have probably never heard of Professor Moriarty'. The abstract nouns 'genius' and 'wonder' launch the biographical sketch. 'Pinnacle' and 'summit' pre-figure both professional rivalry and the Alpine scenario to come. And the reader is as curious as Watson to understand why this anonymous man cannot be left 'walking the streets of London unchallenged'.

As if reading from his 'M' Index, Holmes couches the potted biography in academic language, suppressing subjectivity, despite his harried condition. The facts establish Moriarty's intellectual stature and the detective's achievement in viewing the current crisis as a purely professional matter.

'So much is known to the world...' This closing, Miltonic topic sentence reaches forward to the disclosure of much more to which only the detective is privy. The language now is of undiscovered crime, unseen power, shielded and shrouded maleficence. And, as Holmes warms to his narrative task, he finds natural resort in the classical parallel of the Minotaur myth. Like Theseus (except that the detective is his own Ariadne), Sherlock Holmes has 'seized' his 'thread and followed it till it led' him, 'after a thousand cunning windings, to ex-Professor Moriarty of mathematical celebrity'.

The vocabulary here mirrors the labyrinth in its multi-syllables ('mathematical' and puns ( 'ex' is also Mr. X and 'celebrity' echoes cerebral. ) Allusion to the personified mutation that is The Minotaur relates readily to Moriarty's mutational 'hereditary tendencies'.

But Doyle needs a human parallel to prepare for Moriarty in the flesh.

In 1887 The Globe published 'How I Write My Books' by Wilkie Collins, in which he describes how Anne Catherick 'offered' herself as a character for 'The Woman In White':

"I devote the evening to a new effort — and fail. Experience tells me to take no more trouble about it, and leave that other woman to come of her own accord. The next morning, before I have been awake in my bed for more than ten minutes, my perverse brains set to work without consulting me. Poor Anne Catherick comes into the room, and says: "Try me"."

Doyle requires a very human legend, universally known: one respected even if hated; one renowned for his organisational genius. 'The Napoleon of Crime' was for this story and from Doyle's own point of view the perfect analogy. Listen to the author addressing Robert Barr in the McClure's Magazine interview of November, 1894:

" He was a wonderful man - perhaps the most wonderful man who ever lived. What strikes me is the lack of finality in his character. When you make up your mind he is a complete villain, you come on some noble trait, and then your admiration of this is lost in some act of incredible meanness...The secret of his success seems to me to have been his ability to originate gigantic schemes that seemed fantastic and impossible, while his mastery of detail enabled him to bring his projects to completion where any other man would have failed." 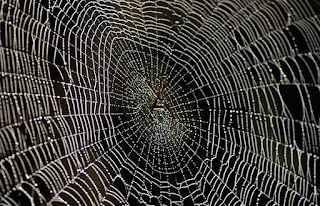 Now Holmes has tracked, located and identified 'the spider' sat 'motionless in the centre of its web'.  Elsewhere, Moriarty is 'reptilian' : but, above all, he is human...because Holmes is and they are both to die.

We come to the climax of this post, the centre of the story and its web. Doyle's deep organising power and rich allusiveness of vocabulary,  are nowhere more apparent than in the paragraph at the apex of Holmes's second movement of narrative. I quote it now with key features highlighted.


"He is the Napoleon of crime, Watson. He is the organizer of half that is evil and of nearly all that is undetected in this great city. He is a genius, a philosopher, an abstract thinker. He has a brain of the first order. He sits motionless, like a spider in the center of its web, but that web has a thousand radiations, and he knows well every quiver of each of them. He does little himself. He only plans. But his agents are numerous and splendidly organized. Is there a crime to be done, a paper to be abstracted, we will say, a house to be rifled, a man to be removed--the word is passed to the Professor, the matter is organized and carried out. The agent may be caught. In that case money is found for his bail or his defence. But the central power which uses the agent is never caught--never so much as suspected. This was the organization which I deduced, Watson, and which I devoted my whole energy to exposing and breaking up."