"His Last Bow" - An Ode of Remembrance.

"As the stars that are starry in the time of our darkness,
To the end, to the end, they remain."

(The closing lines of For The Fallen by Lawrence Binyon, 1914.)

My Dad was born a couple of months before Binyon's famous poem appeared in The Times.

This Sunday, he will be reciting the better-known 4th stanza for the residents and staff at his care home: "They shall not grow old...", remembering especially his own 8th Army comrades from World War Two.

When I saw him yesterday he said "the trouble with living so long is there's too much to remember". He does very well, recently reeling off, without prompting, the names of his village schoolteachers in 1920.

Our history is not yet history to him.


While dad was blissfully unaware of the "East Wind coming", Sir Arthur was preparing to withstand its "blast". The War Office refused his application for a full commission (he was 55) but, by the end of 1914, had taken up his initiative to form volunteer forces and he enlisted as a private in the Crowborough Company.

This lowly Dad's Army status contrasts dramatically with Doyle's influence and significant contribution to the war effort. Any assessment of His Last Bow must take into account the context in which it was written. 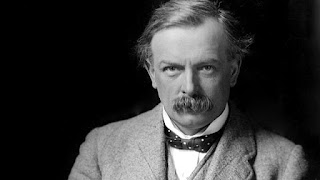 Surely Private Doyle, No. 184343, 4th Battalion, The Sixth Royal Sussex Volunteer Regiment must be the only Private to have lunched and breakfasted in Downing Street with Prime Minister, David Lloyd George. These meetings took place in early 1917, by which time Doyle had pretty well abandoned fiction to write (with regular input from 50 generals in the field) his history of the war (published in instalments as it happened).

Lloyd George clearly valued Conan Doyle's opinions (as did Winston Churchill with whom he corresponded). Their active association had begun in September of 1914 when, as Chancellor of the Exchequer, Lloyd George took responsibilty for the new Propaganda Bureau. Along with other writers, such as H.G.Wells, Doyle was invited to join. The Board's literary agent was his own, A.P.Watt.

Doyle's influence and writings eventually brought about improvements in body armour for soldiers and (just as overdue) official appreciation of the clear and present danger of German submarine warfare. The latter had for long occupied Doyle: The Bruce-Partington Plans may be set in 1895 but the story was written in 1908, prefiguring Doyle's naval advice. Moreover, if Herr. Oberstein is in the market for secrets in '95, Von Bork has been in England under cover since 1910; Holmes (as Altamont) on the spy's trail since 1912 - details that reflect Doyle's own prescience.

The War Service of Sherlock Holmes. 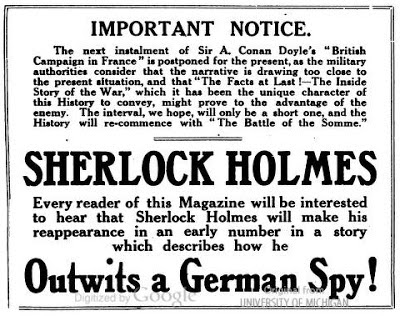 Although Doyle wrote to Greenhough Smith at The Strand "I can't attune my mind to fiction", he made an exception with the story His Last Bow. It is written by May 31, 1917 when Doyle pleads with Smith in a letter not to let the illustrator give away the plot 'as is so constantly done'. It is two years since his last Holmes story, The Valley of Fear.

When it appeared in Collier's and The Strand in September, 1917, the new story was sub-titled The War Service of Sherlock Holmes and had its origins in a question put to him by the French General Georges Humbert on a visit to the front line in The Argonne early in June, 1916. Asked what Sherlock Holmes was doing for the war effort, Doyle replied he was too old for active service.

Clearly, however, the remark had sparked his imagination and he produced a story unlike any other in the Canon.

I miss the narrative voice of John Watson in The Mazarin Stone, in The Blanched Soldier and The Lion's Mane. I do not miss it in the 3rd person narrative of His Last Bow.
Doyle's choice of narrative voice is artistic and not the result of failing imaginative powers. This story is, first, the closest Sherlock Holmes comes to real life events. The 3rd person is the voice of non-fiction and imparts to the tale much of its propaganda value.

The narrative is also able to proceed without reference to Holmes or Watson for some time - to be precise, for long enough to mirror the unfounded complacency of the two Germans and Holmes's undercover work as Altamont.

Most importantly, 3rd person narration elevates the war above mere fictions and characters. Conan Doyle can have his cake and eat it - on the one hand, though far from Baker Street, we still revisit the old friendship and sense dear Mrs. Hudson in old Martha (caught so sensitively by Dorr Steele in Collier's). 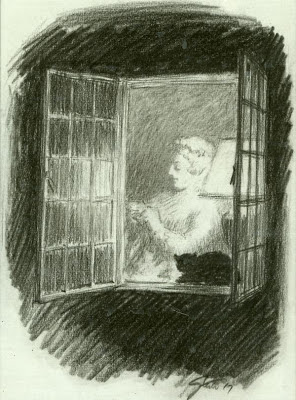 On the other hand, Doyle is freed to write with all the passion and pain he felt by then what amounts to a prose-poem as intense as The Great War poetry:

It was nine o'clock at night upon the second of August--the most terrible August in the history of the world. One might have thought already that God's curse hung heavy over a degenerate world, for there was an awesome hush and a feeling of vague expectancy in the sultry and stagnant air. The sun had long set, but one blood-red gash like an open wound lay low in the distant west. Above, the stars were shining brightly, and below, the lights of the shipping glimmered in the bay.

Into this description of 2nd August, 1914, Doyle pours blood from the open wound of three terrible years.

I doubt he thought any German likely to believe Sherlock Holmes was real, that Germany's spy network was compromised from day one of hostilities. (Though Nazi Germany fell for some amazing allied ops of misinformation in World War Two.)

This was not the point. Doyle realised the spirit of Sherlock Holmes raised morale at home and embodied for the enemy all it sought to destroy.

When His Last Bow gave its name to the loose collection of stories John Murray published, its sub-title became "An Epilogue". This muted the propagandist intention, implying the literary and theatrical. Now it is, chronologically, the last act of Holmes's illustrious career. And, as in the epilogue to a play, traditionally spoken in character by the lead actor, writer, player and character seem to speak with one voice.


The final paragraphs are themselves an epilogue, often quoted but very rarely experienced on film.

Eille Norwood's silent 1923 film of His Last Bow is lost. Jeremy Brett did not live long enough to grace our TV screens with his version. Ben Cumberbatch may provide ( I refer to the enigmatic Sherlock series 3 clue words: rat wedding bow.)

Thankfully, we have Basil Rathbone and Nigel Bruce in the classic final scene of Sherlock Holmes and the Voice of Terror. This propaganda film made in the middle of another World War seems a fitting setting for those stirring words of faith and optimism with which Conan Doyle concluded His Last Bow.


Some may wonder whether it is possible to do justice to this story in time of peace. I hope the BBC attempt to do so - anything is possible if the writing is of high quality. Witness the astonishing final scene of another eloquent Ode of Remembrance, Blackadder Goes Forth.

This is Remembrance Day as I close.
I leave you with an image of the poppy crocheted by Sherlockian, Fiona-Jane Brown. You can buy one in memory of The Fallen. 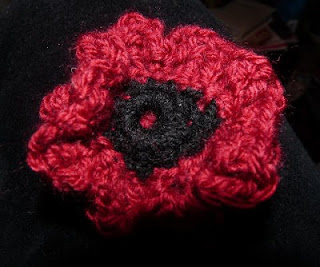 Click the link to go to Fiona-Jane's Facebook page FIONA-JANE BROWN POPPY
Posted by Altamont at 1:40 AM