Orchardson's quietly dignified painting (imbued with a sense of Hardy's "darkling" fate) poignantly illustrates that resignation to "the knot there's no untying" experienced by Victorians trapped in unhappy marriages.

30 years before this painting "The Matrimonial Causes Act" of 1857 set up a civil Divorce Court, replacing the traditional Ecclesiastical Court. While a husband seeking divorce had only to prove adultery, wives must additionally prove aggravating circumstances such as desertion, cruelty, incest, bigamy, rape, sodomy or bestiality.

Manifestly unfair by today's standards, the controversial Act was one small step taken in the teeth of strong opposition (including Gladstone and The Queen, who likened the sensationalist news accounts of court proceedings to 'the worst of the French novels...most pernicious to public morals'.)

There is a delicious description of (bachelor) Sir Cresswell Cresswell, the first ever Divorce Court judge in the Quarterly Review:
"He has no ugly prejudices, no reminiscences, pleasant or unpleasant, to stand in the way of equitable decisions. He has no dread of a curtain lecture at night for dealing heavily during the day with some erring one who might have attracted his wife's pity. Besides, a judge who has just left a scolding wife, depend upon it, does not assume composure with his wig." 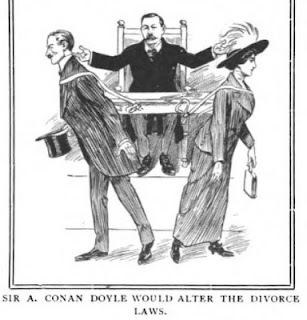 The success of the new law would seem to be largely due to this inspired appointment as his Wikipedia entry asserts:"The new law increased petitions for divorce one hundredfold and there were fears of chaos but Cresswell took a managerial role in regulating the new flood of litigation. He showed great sensitivity in dealing with genuine grievances but upheld the sanctity of marriage and was capable of being severe when necessary. However, he was also instrumental in moving the legal view of divorce from that based on a sacrament to that based on contract. He worked with colossal speed and energy, deciding over one thousand cases in six years, only one of which was reversed on appeal. He achieved some public fame and huge respect popularly being held as representing the five million married women of Britain. His activities in this field are referred to in Anthony Trollope's Framley Parsonage: 'most marriages are fairly happy, in spite of Sir Cresswell Cresswell'"

Much remained unreformed however. The procedure was very expensive and tilted firmly in favour of male petitioners. (though even Lord Russell had to endure scandal and jail before securing his divorce).

Hence, we find, prior to the 1911 Strand cartoon above, moves for further reform reflected in the literature of the times. Dickens's Bleak House and Hardy's Jude the Obscure are major contributions to the debate. In 1906, Arnold Bennett was on topic with Whom God Hath Joined which may be read online at Archive.org.

What follows may come as a surprise. The Strand's cartoon  illustrated Conan Doyle's contribution to a symposium of prominent people invited to describe the most important action they would take if they had absolute power for a day. I quote in full:
"If Sir Arthur Conan Doyle were given supreme power, a power as great as both Houses of Parliament, for a single day, he would exercise it in the direction of the reform of the divorce laws. 'The divorce laws,' he writes, ' are so arranged at present that divorce is practically impossible for a poor man, that people are tied without hope of release to lunatics, drunkards, and criminals, and great numbers (more than two hundred thousand people) are separated by law, and yet are not free to marry again - a fact which cannot be conducive to public morality."

Doyle's views are echoed by Hardy in Hearst's Magazine the following year:


"the English marriage laws are. . . the gratuitous cause of at least half the misery of the community."
Hardy's wife, Emma, died that very year. Doyle too had lost his first wife, Louise (to tuberculosis), in July of 1906. It was the year the creator of Sherlock Holmes accepted (for the next 10 years) the Presidency of the newly-formed Divorce Law Reform Union.

By the close of 1907 Doyle had married Jean Leckie and moved from Undershaw to Windlesham. All changed: changed utterly.

Given his prominence in the campaign for divorce reform during this period of change, I think we have to be careful in any speculation on motive. To assert Doyle was reacting to the experience of his first marriage takes no account of the kind of man he was. Biased as she cannot help but be, I warm to his daughter, Jean's views on the matter as expressed in conversation with Christopher Roden An Interview with Dame Jean Conan Doyle

In any summation of Sir Arthur we have to acknowledge the chivalric code by which he lived. This is an honourable man, of iron self-discipline and Quixotic idealism. It is this trait which informs his interest in divorce reform and resolves the apparent paradox of his negative stance toward the suffragette movement. The system was unfair and he saw himself precisely as a knight coming to the rescue of damsels in distress, rescuing tens of thousands of women 'from the embraces of drunkards, from bondage to cruel men, from the iron which fetter locks them to the felon or the hopeless maniac'.

Doyle's pamphlet of 1909, Divorce Law Reform, contributed along with Earl Russell's work in The Lords to the establishment of a Royal Commission. As this article from July 11, 1913 Votes For Women newspaper shows, his work on divorce was valued by the Suffragettes but they remained frosty about his opposition to female suffrage Votes For Women Article . Doyle had however taken on the establishment in irrevocable opposition to religious attitudes: No church 'has the right to impose its own views upon the general public' .

On October 28, 1917, Doyle wrote to his son, Innes:
"I have a rather contentious life as I have two big subjects on which I seem, with no deliberate intention of my own to have become a leader, that of devil-made marriages and...psychical research...The latter is of course far the...more permanently important. "

Nevertheless, typically, he feels duty-bound (as with the Olympic Games) to press on, approaching Edward Shortt (the next Home Secretary) on the subject of Divorce Law Reform, writing (this time to Mary Doyle):

"Why is it that when you try to do any helpful thing in this world it is always the so called 'good' whom you find in a solid lumpish block against you. I suppose that was just what Christ found with the Pharisees...yet he won through in the end. A strange world! The next one is better."

It would be 1923 before the church's stubborn resistance to the Commission's work was overcome.

I would urge the reader at least to take a look at Arnold Bennett's passage describing his character,  Lawrence Ridway's observation of a divorce court in Whom God Hath Joined because it superbly encapsulates Doyle's response to the current unhappy state of affairs. The passage is available here: A Day in the Divorce Court (please scroll to find the quotation).

'Divorce' is mentioned by name in only two Sherlock Holmes stories. Those familiar with Hound will recall the experience of Mrs. Laura Lyons. But that of Dr. Leon Sterndale is more thought-provoking and closer to the time period I am examining.

The date of Strand publication of DEVI was December, 1910. Of Brenda Tregennis, in mitigation of his crime of murder, Dr. Sterndale pleads:

"For years I have loved her. For years she has loved me. There is the secret of that Cornish seclusion which people have marvelled at. It has brought me close to the one thing on earth that was dear to me. I could not marry her, for I have a wife who has left me for years and yet whom, by the deplorable laws of England, I could not divorce. For years Brenda waited. For years I waited.'

The story concludes with one of those rare moments when the reader glimpses the man beneath the logical detective: "I have never loved, Watson, but if I did, and if the woman I loved had met such an end, I might act even as our lawless lion-hunter has done. Who knows?"

And one may add Who knows how Dr. Doyle would have acted too.

What is certain is that Doyle created in Mr. Henry Baker and his hat as fully rounded a picture of Everyman Resigned to Marriage as you may wish for. I leave this December post with that most Christmassy of Sherlock Holmes stories The Blue Carbuncle and invite you to watch Frank Middlemass's definitive performance in Granada's 1984 production.


I imagine Mr. Henry Baker strikes many a chord even today in his remarks on the Christmas spirit to Windigate, Landlord of the Alpha Inn.