On First Looking Into Richardson's Clarissa.

In this well-known painting, Miss Theophila Palmer (whichever the volume) is well into Samuel Richardson's Brobdingnag of a novel. By contrast, I have just landed on its coast, in company with @Lynn_Shepherd and other Twitter users who have commenced reading "Clarissa" in real time corresponding to its dated letters. I am, therefore at the end of Letter III.

Before proceeding (on January 15) I want to do some preparatory thinking which, perhaps, will sustain and light my journey.

I must first observe the irony in a painting by an uncle of a niece reading a book about a young lady written by a man. Nor am I Theophila. In 1747 (the year before "Clarissa" was published) Reynolds painted "Boy Reading", which better catches my gender and self-conscious stiffening of resolve for the task ahead. 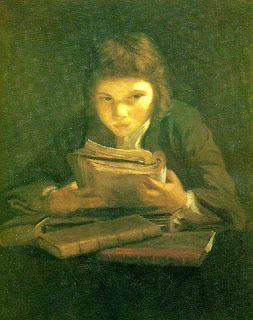 [NB: for those fascinated, as I am, by images of readers reading, I recommend William B Warner's illustrated web article:  "Staging Readers Reading" ]

The notes that follow are personal reminders informed by the belief that a novelist teaches me, early on, how I am to read the ensuing fiction. 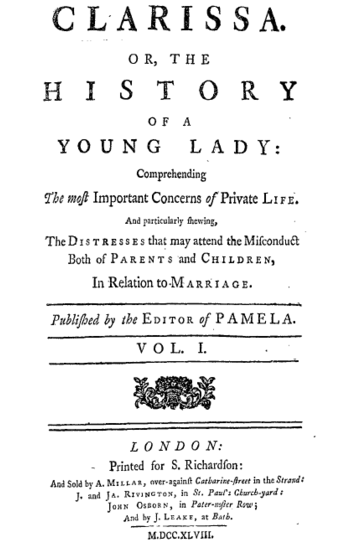 The title-page is conventional enough for the period & genre, illustrating a general obligation felt by the early novelists to preview the lie of the land ahead. Partly informative, mostly publicity designed to lure and assure in equal measure, the title page reserves its largest typeface for the immediate, first name intimacy of "Clarissa". Apart from its unsurprising impression of 'clarity' (that's what it means) this Latinate, Augustan name takes me straight to Pope's "Rape of the Lock" (as, for that matter, will 'Arabella'). It is by way of being a stock literary type and I note the generality also of "A Young Lady", & "Comprehending"; the highlighting of "Concerns", "Distresses", "Parents", "Children" & "Marriage"(implying propriety in the drawing of morals). The wink of promise of sensational content in "Misconduct" and, especially, the revelation of the "Private Life" of a "Young Lady" insinuates all.

What follows between the title page and Letter I convinces me Richardson seeds in my mind the question of whether "Clarissa" will settle for either the sensational or the moral OR transcend both in a more consummate achievement. Will "Clarissa" the novel amount to more than its eponymous central character, a prose "Hamlet"?

I'm offered three further preparations for reading which strike me as less conventional and revelatory of the author's designs: 1)The Preface 2) The Names of the Principal Persons and 3) Letter summaries.

In itself a familiar encounter in an early English novel, this Preface is less concerned to offer an Apologia than to support 2) & 3) in presenting convenient 'factual' information about narrative and characters. 'The Names' borrows 'Dramatis Personae' from the drama; the summaries may not be read with much profit before the Letters they précis but will perform a very useful function as Index to the barely uninterrupted flow of letters to come.

Richardson clearly wishes to avoid "dry narrative" and the provision of 2) & 3) free him to construct " letters...written while the hearts of the writers must be supposed to be wholly engaged in their subjects...many of them written in the dialogue or dramatic way....Much more lively and affecting," (Preface).

PREFATORY THOUGHTS ON THE EPISTOLARY FORM

-These are letters; not diary entries.

- "Spontaneous" as the author avers them to be a) one chooses to write or not. One selects when to write (delays in replies may be more than postal). One composes a letter (it's not the same as impromptu conversation). One hides & reveals in a form only partly analogous to soliloquy. Richardson is writing every letter.

- Every letter is its own narrative voice. This voice is naturally partial. I am not to take any letter at its word. With no over-arching narrative voice I must work more actively than usual as a reader to "hear" the author AND to BUILD my own best narrative from the disparate elements provided.

- I am aware that each letter will draw me into its own lively charms but I am to maintain a perspective that is able to absorb each partial glimpse in continuous reassessment. I liken this process to the theoretical introduction of new mirrors and shards of glass into a kaleidoscope - one new piece shifts the whole perspective.

-Richardson has hit upon a form that places imaginative responsibility upon the reader - only I can fully conjure the world coded in the Letters. It's the novel as play. I do this in the theatre. We all do it in life.

What World? I hazard, having now read to Letter III that "Clarissa" the novel is that world, and that Clarissa, the heroine in a fictional narrative, is you or me by any other name. I anticipate a novel which seeks to mirror the fullness of any life which is more than a list of traits, actions, speeches and feelings - a living being is IN life and only an appreciation of both the inner and outer worlds may come some way toward doing justice to the complexity of human being.

I step from the shore.