The Promotion of Friend Lestrade.

"The Six Napoleons" is one of my favourites in the Granada Holmes series not least because it is THE Lestrade episode. The hour begins and ends with a masterly triple act performed by Brett, Hardwicke and Jeavons and the still above represents a passage of consummate, largely silent comedy roughly halfway through the story. Finding himself alone in Baker Street, the Scotland Yarder (we just know!) half-imagines himself to be the Great Detective, trying, as it were, Holmes's armchair for size (and inspiration). Holmes and Watson join the eavesdropping audience as Lestrade gives way to temptation,  peeking (unprofitably) into a folder of private papers.

The exquisite, moving 'handshake' epilogue confirms the greatness of Colin Jeavons' performance, the promotion of Lestrade to most significant policeman in the Canon, to the status of "friend" and to an acting role coveted by the best of our actors. I think it a direct consequence of Granada's creation that Lestrade's torch burns so bright this century in the capable hands of Rupert Graves, Sean Pertwee, Eddie Marsan and Mikhail Boyarsky.

The Jeavons portrayal confirmed Lestrade as Chief amongst Doyle's Inspectors on film and faithfully reflected the character's association with Sherlock Holmes over two decades, despite adapting but five of the thirteen Canon stories in which he appears (and transferring him to CREE).

Excellence of acting, aside, (for me) Granada's appreciation of the nature of short story renders this portrayal of Lestrade unsurpassed. I know of no other production that understands so clearly what a short story is, how ideal it is in form for the Sherlock Holmes series (not serial) and how it may most fruitfully be adapted. 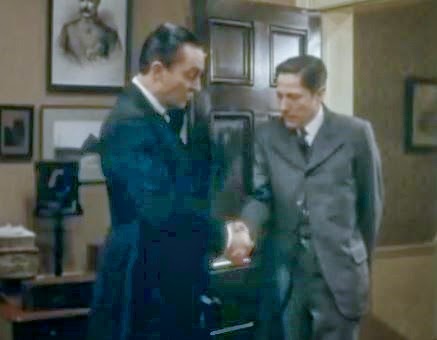 "If any little problem comes your way I shall be happy, if I can, to give you a hint or two as to its solution.” Holmes to Lestrade SIXN.

Short stories are the sonnets of prose fiction. Just as the fourteen line poem is not an incomplete ode, ballad or epic, the minimalist painting is a finished work. It was Doyle's express intention when first writing for The Strand to create stand-alone detective stories. Order was immaterial. A story was one case and he hit upon the ideal narrator in Watson and the most flexible, potent format-  the reminiscence - through which to record "any little problem". The short story, not the novel, is the classic Sherlockian form.

Consider the elegant parallel of the problem presented,  the "hints or two" to a solution and the mode in which short stories work upon the reader. "The parallel is exact". There is about the construction of the short story the same severe discipline that Holmes brings to his arrangement and examination of "the facts" and an identical requirement (on detective and reader) to hypothesise, expand, deepen and flesh out. Doyle's art lies in his intuition for saying just enough and no more to feed the reader's imagination. He does it with scene-setting, descriptions of weather and, most relevantly here, with characters. It is also no accident that the Canon is eminently quotable - Holmes is given to aphorism which is harmonic with the chosen prose form and theme of detection.

The Granada team fully comprehended that a short story comes alive directly in the reader's imagination. A  play script on the other hand comes alive via performance by actors. In adapting fiction for stage or screen account must be taken of these crucially different modes of experience. Brett's performance is emblematic of how Granada's script writers found a filmic equivalent to the "hints" a reader would normally expand, deepen and flesh out alone. He is all gesture, expression, exclamation and posture designed to convey quanta of information far beyond the simplicity of the action. The "mind palace" of Benedict Cumberbatch's Sherlock is externalised in on-screen captions; Brett's technique of hinting (yet just as wholly communicating) is closer to the Tardis which is bigger inside than it seems from without and a closer parallel to Doyle's own method.

It is in this fertile context that Inspector Lestrade leaps so readily to life in the hands of a highly skilled actor and the scene with which I began this post is example of how, with the minimum of actual appearances in the series, the portrayal is yet so potently brought to the screen.

The Ladder of Promotion.


Other adaptations may not be as sensitive to the nature of the short story but have contributed significantly to the elevation of Inspector Lestrade to the status he now enjoys. Jeavons stood tall on the shoulders of others who had gone before. I rate, for example, Frank Finlay's performances in 1965 and 1979 and have a nostalgic soft spot for Archie Duncan, Lestrade and Little John of my childhood. However, I should now like to focus on the other significant moment in Lestrade's cinematic history when he earned a belated promotion after years of obscurity and made the part attractive to actors of Finlay's calibre and a source of daily bread for journeyman Duncan.

The first three decades of the 20th Century were barren years for Doyle's policemen. Of the four stage plays by ACD and/or William Gillette, only 1910's "The Speckled Band" requires a policeman - "Inspector Downing" - with the tiniest of roles. The silent era employed John Willard as 'Inspector Gregson' in Barrymore's 1922 film, the year after Arthur Bell's 'Inspector Lestrade' for Eille Norwood in the shorts: NOBL, RESI, EMPT & TIGER. In 1923, Tom Beaumont covered all three detective roles ('Lestrade', 'Gregory' & 'Taylor') in  Norwood's versions of MAZA, FINA, LADY, CARD & SILV.

The rest is silence - Friend Lestrade remains as obscure and distant as Joseph Alexander Lestrade of St Lucia. Generally understood to be the man who lent his name to Doyle's character, Joseph was an acquaintance in Edinburgh and took his degree (Bachelor of Med & Master of Surgery) in 1883, two years after Doyle graduated. It would seem he returned to his native island and I believe I find him there in 1904 as "Joseph Alexander Lestrade M.B.C., Q.M., Colonial Assistant Surgeon", residing in the original capital, Soufriere. There are unspecified charges against him in the National Archives for 1905 - no doubt he encountered a policeman.

﻿﻿﻿﻿﻿
The (talking) thirties had, naturally, a growing pool of experienced film actors. While the performances are limited by that traditional focus on Holmes and his villain attributable to William Gillette's influential play, seasoned actors like Philip Hewland & Charles Mortimer ( for Wontner) and Alan Mowbray (for Owen) brought considerable stage and screen skills to what remained two-dimensional Inspectors.

The first real step-change, the first secure move up the ladder of promotion may be observed in the six Universal Films made in 1943-6 starring Basil Rathbone and Nigel Bruce. Unsophisticated as the characterizations may be, both Doctor Watson and Inspector Lestrade would never be the same again. Bruce and Hoey were famous, illustrious and well-loved actors of stage and screen and (modestly, I feel) restored their fictional men to the status Doyle intended. "Lestrade's little cock-a-doodle of victory", you might say.

Dennis Hoey, born during the Great Hiatus of 1893, is the first performer of this part whose name most people know. I shall not dwell on the Universal Films except to note Lestrade's banter and humour with, especially, Dr Watson illustrates hitherto untapped possibilities in this role.

What may not be as well known is that Hoey was extremely versatile (He played Rochester on stage and his appearance as White Chief, Mala, in 1937's "Uncivilised" may be viewed HERE ) . He was an excellent singer, creating the part of Ali Ben Ali in the first stage production of "The Desert Song". In a delightful coda to his film career Dennis Hoey got to play Sir Arthur Conan Doyle in the 1956 Omnibus television programme "The Fine Art of Murder" also starring Rex Stout as himself.

I shall end this lengthy post with two delights: a British Pathe short from 1930 of Dennis Hoey singing AND a moving, fascinating reminiscence of the man by his son, Michael. Do read it.

N.B. The following link will take the reader to an excellent IMDb list of Lestrade Films: HERE