Where it is Always 1895 - the Story of a Boy and his Sherlock Holmes Story. 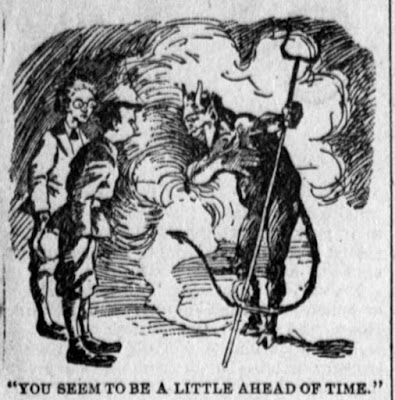 In the summer of 1895, newspapers in St Louis, Missouri, and Canton, Ohio, published a story written for his school magazine by a pupil in Concord, Massachusetts. Variant prefatory notes combine sufficiently to identify the school, the author and his family. While the above illustration accompanies both, their titles differ: “A Trip to Hades” and “Up To Date Detective” may be editorial choices.

The story was first published in “The Minute Man”, the school magazine of Concord Home School. Its author was James Richardson, Jr., son of James Richardson of Cabanne Place. James is described as a promising pupil and his story a clever take-off or burlesque on Conan Doyle. Of interest, certainly, as a very early instance of Sherlockian fan fiction (on either side of the Atlantic), this adventure of Padlock Homes and Dr. Hotson in Hades provides a revealing, window into the reading habits and juvenile imagination of its author.

Moreover, from the scant facts available, I have been able to flesh out something of the history of Concord Home School and, most significantly, link young James with one of the giants of 20th Century American literature.

Please click on this link for the transcription [opens as pdf]: The Story .

James was 16 at the time of writing (see family history) and I think this shows both in the story's weaknesses and strengths. Lightly (if at all) edited for publication, it feels, as it stands, a third too long and would benefit from the excision of passages of pedestrian narrative commonly found in juvenile story-telling. Were I his teacher, I'd have recommended James enrich with descriptive detail and additional dramatic action. It is the product of an undisciplined imagination so carried away the author doesn't quite know what he intends to create. It's less a conscious burlesque than a spontaneous melange of youthful literary pleasures.

This very lack of focus opens a fascinating window on the reading of an American boy in 1895. Holmes, of course, is understandably at the imaginative forefront. To fill the void (hiatus) after the detective's demise, American newspapers serialised "A Study in Scarlet" and "The Sign of Four". Of greater relevance here, Conan Doyle's early work "The Mystery of Cloomber" was made available in a cheap edition to sate public thirst for more Doyle and hyped as "the new novel from Dr. Doyle".

My blog on "The Empty House" [see Cree] locates the source of the abyss image in that early novel's "Hole of Cree" and I detect its influence on James who may also have read a contemporary article noting precisely this prototypical aspect [see May 1895 ].

Equally, Jules Verne figures strongly in the steampunk imagination at work here. All his relevant major works were printed in English and immensely popular well before 1895. To Verne and Doyle James adds a native American spin when he engineers that the climactic discovery of Hotson's story take place by the crater on Mount Shasta. California's volcano is shrouded in supernatural legend.
The process of Americanisation clearly delights young James. Taunton, Mass., and not Taunton, Devon, hosts the murderer, James Blake - himself endowed with a name identical with a national landmark but 20 miles from Concord. Boston's oldest 17th century house was built by James Blake, an immigrant from England's West Country. It is one of only two surviving homes in Massachusetts in the West-of-England style. 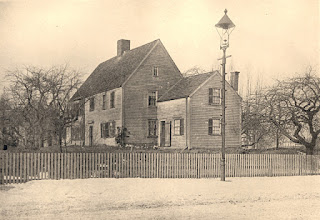 Intriguingly, the building was moving to Richardson Park as James Richardson wrote his story. The makeover is completed by a natural transformation of London's Baker St. into a New York Faker.

It's New York, December 3, 1997. Hotson and the author bestride the future as well as the past. As did a certain H G Wells in "The Time Machine", a work eight years in the making. Whether James had read some or all of the story by 1895 is not known but possible. [see Time Machine for a detailed chronology of publication]. He could certainly have read "The Chronic Argonauts" (1888) A teenager's lack of artistic control over his time slip is, I think, masked by a leaping imagination that relishes the surreal. It's there in Homes, Hotson and (shades of Restoration drama) "Mrs Slimdiet". Perhaps the devil's "hash" is a schoolboy side-swipe at the Concord School dinner lady, but is aptly absurd.

Finally, James Richardson Jr. is bang up to date with two allusions. Hotson discovers an embarrassed Homes playing "And Her Golden Hair Was Hanging Down Her Back" on his violin. Frank Tousey's music hall song was published in 1894 and here is the version James would know: Tousey .
Listen to Dale Evans singing it Here .

Young James has a taste for the risque. Cue Trilby O'Ferrell.

In the year 1895 America was in the grip of a "Trilby" craze. Published serially in "Harper's Monthly" in 1894, George du Maurier's novel sold 200,000 copies in America alone when available in book form in 1895. London would lap up Beerbohm Tree's stage version; America had its own. With Wilton Lackaye as Svengali and Boston's own 27 year old Virginia Harned as O'Ferrell, Mr. Palmer's Company staged "Trilby" at the Garden Theatre, New York in April, having premiered at Boston Museum on March 4th.


James is careful to couch the topical allusion in a moral (if comical) context. Hotson, we are to believe, freed the mesmerised girl from her Svengali by removing the 'wheels' from her head. Perhaps James too is mesmerised, as most young men were by this bohemian beauty. I reckon he'd have jumped at a theatre trip down the road from school.

It's a moot point whether Principal Garland would have arranged such a theatre visit. The reader may judge perhaps from the following links to further information about James Garland's private school which opened in 1890 and changed its name to Concord School in 1897.
1. Concord Directory and Guide: Directory .
2. Unitarian Year Book: Year Book
3. Concord Library Holdings (inc some issues of "Minute Man" Library .
4. Surviving South Bridge Boathouse: Boathouse .
NB: Click Google Earth on this present day map to see the surviving boathouse and gain a sense of the (wooded) 75 acres of school estate: Estate .

A private boarding school. $600 per annum - James has a wealthy father, back on Cabanne Place, St Louis, Missouri. Here he is, banker, James Clifford Richardson, son of James Richardson and so usually referred to as "Jr., like his own son, the schoolboy author:

To read the links below is to encounter multiple tragedy and one of the great love stories of the 20th Century. Young James born in 1879 will disappear from history but we know he suffered the successive losses of father, sister and mother and lived to see his famous younger sister (age 3 in 1895) take the bohemian literary road of Trilby O'Ferrell to Paris as the first Mrs. Ernest Hemingway. And the rest is history and a moveable feast.
1. Family: Family .
2. Father's History: Father .
3. The Road to Suicide: Suicide .
4. Elizabeth Hadley Richardson Elizabeth .