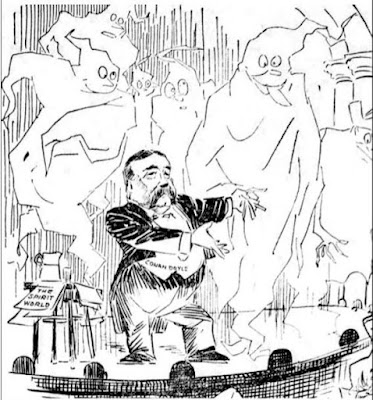 [Conan Doyle lecturing on spiritualism as visualised by the New York Tribune 19 April, 1922]

As Sir Arthur Conan Doyle entered what would prove to be his last decade on earth, he devoted ever more time and energy to promoting spiritualism at home and abroad through lecture tours and debates. In London, the lost Queen's Hall on Langham Place was a favoured venue and, ironically, the very stage occupied by The Rolling Stones over New Year, 1922, performing a burlesque on the author of Sherlock Holmes called "Spooks" that had been played up and down the country in theatres (including the Stoll circuit) and pier pavilions since its premier at the Strollers' Pavilion, Derby, on 1 March, 1920.

Long before Jagger/Richards et al, producer, Richard Jerome, rechristened a concert party called "Originality" and sent "The Rolling Stones" on tour with a new entertainment called "The Pierrots' Carnival", written by Jerome and Dick Henty and directed by its star actors, Dick Francis and Doreen Season. 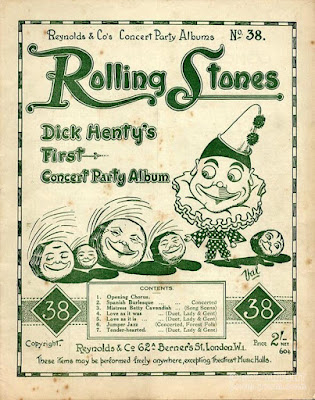 According to the Derby Daily Telegraph for 2 March, 1920, "The Pierrots' Carnival" was a concert party entertainment, comprising musical numbers and burlesque scenes, framed by a novel idea. The company are supposed to be a set of art students in the Latin Quartier of Paris, and owing to their penniless condition are deprived of a visit to the carnival. As they are bemoaning their penurious state, Pierrot (Dick Francis) bursts in, and they decide to hold high revels among themselves. The Arts are personified as follows: Music - Doreen Season; Drama- Dorothy Clifford; Dance- Marie Studley; Painting- Guy Reeve; Sculpture- Alec Hardisty and Literature- Dick Henty.

This first review mentions in passing a burlesque of "Spiritism", in which Adam and Eve, Antony and Cleopatra, and Napoleon and the Kaiser are "materialised". More detail on this comes from a variety of news articles.

The Cheshire Observer for 20 March, 1920, tells us "Spooks, a skit on the modern seance, and introducing historic characters, was remarkably humorous".

From the Staffordshire Advertiser for 29 May, 1920, we learn "in a concerted number, entitled 'Spooks', Sir Arthur Conan Doyle appears and at a seance he produces Adam and Eve. Then Sherlock Holmes comes on and proves that spiritualism is all a farce. To do this he calls Napoleon and the Kaiser, whom he unmasks".

On 3 June, 1920, The Stage noted "Among the best things done (was) 'Spooks', in which Sir Arthur Conan Doyle is shown at a seance producing Adam and Eve".

None of the 28 references to the production found in the British Newspaper Archive is illustrated by production or artist images.

Young Dick Henty, who played Sherlock Holmes, was primarily known as a talented composer of songs and often advertises himself as the brother of the famous novelist, Maurice Hewlett. Some of Henty's surviving sheet music , such as "I'm a Cornish Man" (1926) names the librettist as "William Hewlett". I think this is Henty himself: Maurice's family tree lists Henry William Hewlett as a brother.

He had previously been with Pélissier 's original "Follies" and "The Quaints"for whom he wrote the music featured in "The Pedlar of Dreams", a 1915 revue-fantasy that had also featured Pierrot as the central character.

Henty is one of the troupe in this blurred illustration to the Rolling Stones 1924 sheet music: 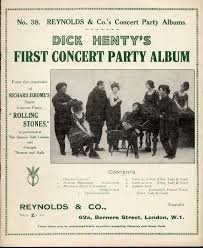 "The Tatler" included a caricature of Dick Henty composing for a Windmill production in 1935: 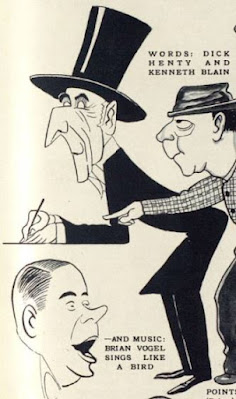 Dick Francis would presumably have burlesqued Conan Doyle wearing the costume of Pierrot. Here are images of him from other productions: 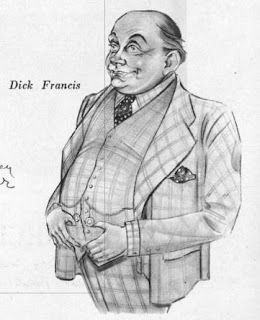 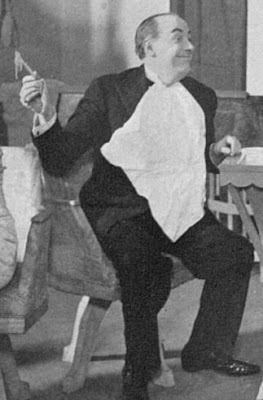 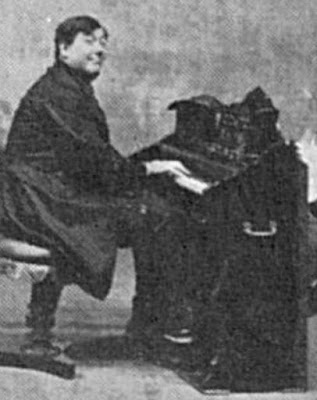 [The Sphere 6 November, 1926]
Epilogue - Conan Doyle's Last Decade.
There is a long history of burlesque representations of Sherlock Holmes stretching back to 1893's "Under the Clock". Doyle himself was the occasional butt for ridicule before the war but his very public championing of spiritualism rendered him especially vulnerable in later years. The Rolling Stones skit is symptomatic of a general shift. ACD was still submitting the stories that made up the Casebook from 1921 to 1927, yet his preoccupation with the next world seemed at odds with the detective for whom he composed the following observation in The Sussex Vampire (1924):
"This agency stands flat-footed upon the ground, and there it must remain. The world is big enough for us. No ghosts need apply."
It's significant that the fictional character is tasked with debunking spiritism in "Spooks". Holmes has morphed into a repository for common sense and the rational (in contrast to Doyle's embrace of all things supernatural), aided, I would suggest, by the signal success of Eille Norwood's Stoll series. Americans viewed Norwood's Holmes as the authentic, serious incarnation, as opposed to the contemporary interesting, but star-led, Barrymore blockbuster.
In this final decade, Conan Doyle seems marooned between the substantiality of his fictional creation and an anarchic Puckish spirit abroad that cannot resist poking fun at spooks and fairies.
On this Halloween Eve in 2021, in the absence of a script or photographs of The Rolling Stones' "Spooks" burlesque, I recommend a film from 1920 that, I think, possesses the same Pierrot-inspired fun at the expense of all ghosts who may apply: Max Fleischer's "Out of the Inkwell: the Ouija Board".