SHERLOCK - If the Deerstalker Fits Wear It.

Even as young Stamford engineers John's introduction to the detective in the Bart's Hospital scene of "A Study in Pink", viewers are as overwhelmed by this force of nature as is the good doctor.

In this blog I shall accentuate the positive but (pace Johnny Mercer) shall not eliminate the negative. I shall mess with Mister-In-Between. This portrayal of Sherlock Holmes deserves balanced criticism. Whatever I proceed to say, this is a Great Holmes in the making.

I shall ignore two matters entirely: the films starring Robert Downey Junior (one new Sherlock at a time, please) and the Sherlock of The Reichenbach Fall which feels a special (and somewhat illusory, even bizarre) case.

You can't hope to be accepted as Superman, Tarzan or James Bond unless the public decides you look like the character. There's a salutory story concerning a hypnotist who failed on multiple occasions to put his lady patient under...until she asked him why on earth he didn't wear a black cloak and fluence her with his hands  and staring eyes (like the stage hypnotists she had seen). Next session he dressed and acted accordingly...she went out like a light.

Apart from the delightful running jokes that handle unfashionable deerstalkers and cigarettes with panache, Cumberbatch's Sherlock deploys his height, long coat, scarf and (above all) stance to project a mythic silhouette as unmistakable as those of Rathbone and Brett.

From the first episode the thrill of the chase is powerfully transmitted. This is a sine qua non and the music score intensifies Sherlock's adrenalin rush when he moves into hyper-drive.

Cumberbatch's Sherlock thinks faster than any Holmes I have encountered and the actor has an enviable facility to speak with un-nerving rapidity. By now we have been trained to accept the novelty of on-screen observations, thoughts and text-messages that amplify Sherlock's lightning intellect as well as ensuring we follow his thought patterns.

Certain traits are already fully developed in the performance: this Sherlock IS palpably observer, scientist and bohemian.

Like Brett, Cumberbatch brings humour to the role - from the wink to John at their introduction to that daring scene of high comedy at the palace. This element has proved crucial thus far: there's comradeship in shared laughter.

This Sherlock achieves gravitas and charisma - the latter, perhaps, more in the eyes of fellow characters than mine. On two series' evidence, I am not as magnetised by every gesture and expression as Rathbone and, especially, Brett could, at the height of their powers, command at will. I am segueing to...

This is the rudest, most callous Holmes I've seen. John, of course, is officer and gentleman. Brett's Holmes may have been aloof, supercilious and demanding but could never be accused of deliberate ungentlemanly behaviour.

Both Rathbone and Brett proved as masterly as Holmes himself at the art of disguise. I hope we see something of this from Cumberbatch.

Partly because the extensive (and exotic) nature of Sherlock's archive of cases has not been satisfactorily established, it is not easy to take for granted Lestrade's trust in him. Or, more importantly, to accept Sherlock as truly "the highest court of appeal in detection"). One misses Watson's continuing discovery of yet another outre problem solved  or another signal service done, without recognition, to the English and other Crowns. Incidentally, Moriarty suffers from a similar lack of background.

In a previous post I called Sherlock immature. By this I meant two things: this is a character in the making and we have yet to encounter Holmes the philosopher. Doyle's original stories are strewn with examples and thanks are due to the creators of the BBC SHERLOCK for leading so many viewers back to the written narratives. Philosophic reflection provides a morality and overview that underscores Holmes' humanity and illustrates why he chose a life of detection rather than crime. It also serves to enhance the sense that we are watched over by..a good angel. Perhaps age will engender this dimension in Sherlock.

Finally, I would just stress the importance of finding ways of presenting Sherlock as a worthy friend to John, because right now it is merely an irony that he calls him John but is less clearly committed to the doctor than Everyman John is to him.

In my next post I shall look at the benefits and limitations of setting Sherlock Holmes ouside his period.

Meanwhile, here is the Philosopher-Guardian: 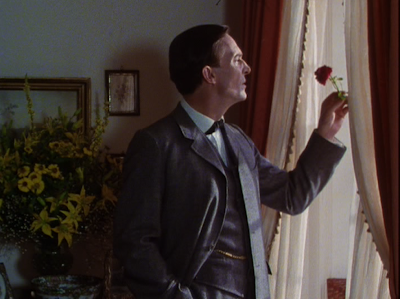 "What a lovely thing a rose is!"

"What a lovely thing a rose is!” “There is nothing in which deduction is so necessary as in religion,” said he, leaning with his back against the shutters. “It can be built up as an exact science by the reasoner. Our highest assurance of the goodness of Providence seems to me to rest in the flowers. All other things, our powers, our desires, our food, are all really necessary for our existence in the first instance. But this rose is an extra. Its smell and its colour are an embellishment of life, not a condition of it. It is only goodness which gives extras, and so I say again that we have much to hope from the flowers.”