Creatures of the Abyss - THE EMPTY HOUSE (4)

"The parallel is exact."

Readers of the long-anticipated new adventure would, in 1903, have been rewarded with a fictional version of this posed, symbolic photograph.

For the Viceroy of India and his wife read Holmes and Watson; the Bengal tiger: Colonel Sebastian Moran, hunted, baited, trapped and brought down.

It is an image in common currency at the time and thus ideal for Doyle's purpose - the credible re-establishment of Sherlock Holmes at the centre of Edwardian life. Coupled with the related (secular) metaphor of the Abyss, a parallel with jungle safari satiated the thirst for exotic adventure shared by Doyle and his avid readers. The implication is you have no need to travel to India for action - cling with Watson to the coat-tails of Sherlock Holmes and there is danger enough right here in London.

Moran is the personification of tiger as hunter and prey but Doyle delays the introduction of this image, intent first to establish Moriarty and his henchman as creatures of the abyss:

"I seemed to hear Moriarty's voice screaming at me out of the abyss...


A huge rock, falling from above, boomed past me, struck the path, and bounded over into the chasm. For an instant I thought that it was an accident; but a moment later, looking up, I saw a man's head against the darkening sky, and another stone struck the very ledge upon which I was stretched, within a foot of my head."

Holmes is still in mortal danger, caught twixt Scylla and Charybdis. Both the Granada series and BBC SHERLOCK  have Holmes in the cross-hairs of a sniper. Doyle prefers the more elemental, savage hurling of natural rock, reserving the image of Moran as shikari until the game is afoot and a re-galvanised Watson ('my revolver in my pocket and  the thrill of adventure in my heart') exclaims:
." I knew not what wild beast we were about to hunt down in the dark jungle of criminal London."... 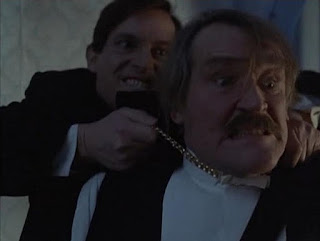 and Holmes is now termed 'the master huntsman'.

In the gloom of Camden House the detective 'sprang like a tiger on the marksman's back'. Moran, in his early 60's, is presented as an aging, cornered wild animal, 'wonderfully like a tiger himself, and Holmes can crown the triumphant moment by drawing the exact parallel:
"I wonder that my very simple stratagem could deceive so old a shikari," said Holmes. "It must be very familiar to you. Have you not tethered a young kid under a tree, lain above it with your rifle, and waited for the bait to bring up your tiger? This empty house is my tree and you are my tiger. You have possibly had other guns in reserve in case there should be several tigers, or in the unlikely supposition of your own aim failing you. These," he pointed around, "are my other guns. The parallel is exact." 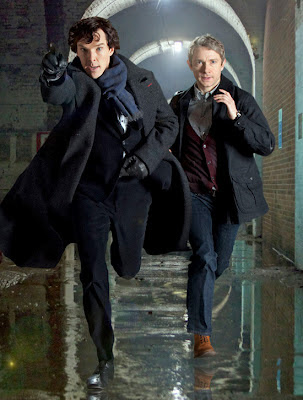 All this is designed to remind the reader of the thrill of a chase coupled with the highest of motives. An exchange between Holmes and Moran in 'The Crown Diamond' crystalizes this impulse which is at the romantic root of these stories:

"HOLMES: You used to shoot tigers?
COLONEL: Yes, sir.
HOLMES: But why?
COLONEL: Pshaw! Why does any man shoot a tiger--the excitement--the danger!
HOLMES: And, no doubt, the satisfaction of freeing the country from a pest which devastates it and lives on the population?
COLONEL: Exactly!
HOLMES: My reasons in a nutshell!" 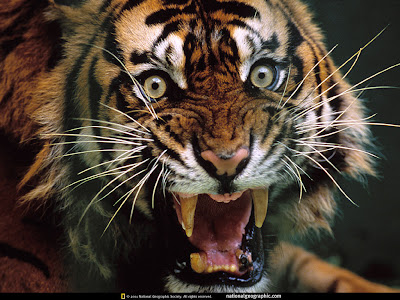 In his Preface to 'The Casebook' Doyle defines these 'adventures' as 'that distraction from the worries of life and stimulating change of thought which can only be found in the fairy kingdom of romance'.

Indeed the terms 'adventure' and 'exploit' are his preferred labels for both the Holmes and Gerard stories. For the detective they may be 'cases' but for everyone else they are vicarious visits to the abyss of perilous adventure with one sure-footed, completely dependable guide - Sherlock Holmes.

Doyle would continue to visit the jungle in other works, notably the Professor Challenger novels and that strange story of 1913, The Horror of the Heights, in which:

"We read in the flight book that the aviator had an experience at 40,000 feet, meeting a new air-jungle world of semi-formed gelatinous creatures, one of which has a more solid form with tentacles and a beak, and does battle with them, surviving, returning to the ground. He vows to go back, at which point we assume he met his doom."
The story may be read here and an excellent article on the story from Ptak Science Books here .

The Empty House establishes criminals such as Moriarty and Moran as creatures of the Abyss. But they are only one circle of a Dantean Hell implied by this current image that was very real to Victorian and Edwardian Londoners and, indeed, societies much further afield. 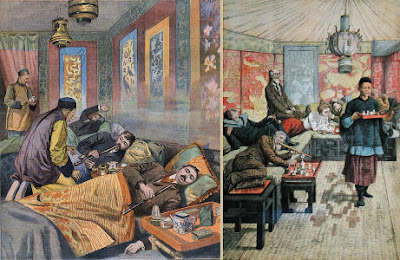 Most importantly, for Doyle's readers, London itself contained other versions of creatures of the Abyss. The Man with the Twisted Lip presents a frighteningly vivid picture of one vile alley to the East of London Bridge. The Bar of Gold in Upper Swandam Lane is but one example of countless opium dens in London's East End, "approached by a steep flight of steps leading down to a black gap like the mouth of a cave...

Through the gloom one could dimly catch a glimpse of bodies lying in strange fantastic poses, bowed shoulders, bent knees, heads thrown back, and chins pointing upward, with here and there a dark, lack-lustre eye turned upon the newcomer. Out of the black shadows there glimmered little red circles of light, now bright, now faint, as the burning poison waxed or waned in the bowls of the metal pipes."

What is most arresting about the ensuing story is not so much the secret life of Neville St. Clair as the undercover work of Sherlock Holmes. An argument may reasonably be made that Holmes' powers of disguise are just as important - and rare - as his deductive powers. The detective is well aware he is a spy in enemy territory, but has the skill and courage to blend in for days. Indeed, taking the stories as a whole, our general sense is that even Watson is never afforded the full picture of Holmes's activities. There are gaps, long periods, extended absences never accounted for in which Holmes could be...anywhere (in England or abroad) and probably is!
Thus does Doyle generate the over-arching notion of the great detective as upon eternal vigil, watching over us, unseen, often in danger, but unflinchingly in pursuit of all that disturbs the peace of the nation. He alone can go where others fear to tread and, occasionally, with Watson, we are afforded a taster of what it is like to visit the Abyss and return unscathed.
Doyle's readers responded to the religious implications of the abyss but were perhaps most afraid of the social version which pre-occupied so many minds of the time.
George Gissing's 1889 work The Nether World (see this article here ) is one of many and varied attempts to come to terms with conditions in London's East End. But I should like in concluding this piece on The Empty House to draw attention to the parallel afforded by Jack London's 1902 visit to the metropolis.
Two matters first:
Camden (the empty) House is unusual precisely because it is empty - had the building been situated in London's East End, it would not have been vacant, but crammed to the rafters with multiple occupants paying exorbitant rents to absentee landlords.
Read Anna Strunsky Walling  first on the character of Jack London. She is prejudiced (head over heels in love) but illustrates the man's remarkable Shelley-esque personality and physical beauty. The link is here . 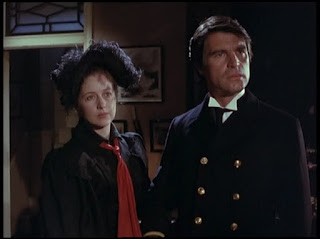 Think Oliver Tobias as Captain Croker  and I think we have something like Jack London.
Next, read a most illuminating article about Jack London's favourite work The People of the Abyss (1903). The article is here .
Centrally, take a look at the work itself, most tellingly read with the original photographs and join Jack London in his undercover visit to the Abyss. The link is here ; the parallel exact.


And, finally, take a look at this article from The Pall Mall Gazette for 29 October, 1891 which takes us to London Night by Night in the company of a certain Johnny Upright. The link is here .

A final word: in these posts on The Empty House I have tried to show with what imaginative skill and solicitous care Doyle set about the re-establishment of Sherlock Holmes at the centre of Edwardian life, through imaginative use of cultural metaphors in common currency at that fascinating time. And I leave you with the image of Holmes the Guardian, so familiar from the opening credits of Granada TV's excellent series.
﻿