Days of Dignity or What You Will.

[This is, I think, the first of two, related education posts. Forthcoming is "The Readiness is All" under the thematic umbrella #Nurture1415. My thanks to @ChrisChivers2 for inviting me to contribute.]

Days of Dignity  or What You Will.

Twelfth Night, and a new school term. At my own grammar in the 1960's we would gather in the first assembly to sing:
"Lord Behold us with thy Blessing
Once again assembled here."
The hymn's third verse opens thus:
"Keep the spell of home affection
Still alive in every heart."

In retirement I have no assembly to attend but I take this opportunity to write with affection about what essentially still lives in my heart and so, surely, is that which I most value from those years in the profession.

I think now that I was blessed to work (from 1969) in a system, with a local authority, advisers, HMI's, colleagues and (especially) Head Teachers who trusted professional autonomy. Moreover, I am crystal clear this was the crucial factor in the generation of that sense of personal and communal dignity I now value above all else in the practice of education. It is thanks to them that the sub-title of my career may be so Shakespearean: "What You Will".

For me, there have always been two significant units in a school: its individuals and its communities. The former addresses the uniqueness of each person, adult or child; the latter is that living nest of Chinese boxes, incorporating local folk & parents, the whole school assembled and such constituent, overlapping, fluid communities as houses, year and form groups, classes, sets, sports teams, orchestras, play casts and staff.

Only in retrospect do I settle on dignity to christen the most gratifying feature encountered. Only now with time and energy for reflection is the beneficent connection patent between teaching English with autonomy and a perennial impulse to engage outside the class room. I can most usefully illustrate with reference to one 1970's 11-16 Comprehensive. With respect to teaching English with autonomy I'll focus on the currently topical matter of setting v mixed ability. I'll then recall a July afternoon that seems now to encapsulate all I wish to say here. But first...

There is about this term a measured, quiet poise I do not detect in the more hackneyed pride we associate with wearing the school uniform and the broadcasting of achievement to the world on school websites or bannered gates. It is in fact the more dignified by its implicit, unspoken influence, palpable to those who sense it and enduring in its impact long after childhood. Where pride is a blatant flag, dignity is a modest pennant. You can't teach this abstract any more than you can character. Those who go about their business with dignity leave something wholesome in their wake born of self and reciprocal respect. With it, failure and success are 'imposters just the same'  and it's engendered by trustworthy acknowledgement of the intrinsic, unique worth of individuals and groups.

It never mattered to me overmuch whether any age-group was 'setted' or 'mixed-ability'. Whatever the theoretical basis of the exercise, practicalities such as staffing levels, equalizing numbers and managing pupil relationships affect the equation. I never put much store in feeder primary grades or (at 6th form college) GCSE results, partly because (this is not a criticism) they often displayed disparity, but mostly because for an English teacher they told nothing like the full story. In addition, to be frank, it was more fruitful to set aside the past as soon as maybe because (like human development) English isn't a linear subject. Hence an undue consciousness of earlier performance was both irrelevant and counterproductive (especially with older students prejudiced by depressing grades).

My instinct has always been to get to know pupils as they present themselves and welcome the group as a nascent society. Apart from confidential pastoral information, the pupil before me is the embodiment of whatever data I need. Why look elsewhere when I have the living subject? My job is to observe and assess daily this ever-changing human data and respond to its ultimate benefit in real time, authentic encounters.

In the absence of a National Curriculum, targets, outcomes, lesson objectives and the like, I taught what and how I wished in the 1970's. Apart from discussing individual students, internal exam arrangements, external syllabi & capitation the most regular item of departmental interest was the expansion of resources, especially literature. The English Scheme of Work was a guiding reminder of that spectrum of matters with which an English teacher is properly concerned and (as with the best use of text books) not to be followed in its necessarily linear publication order.

Richness of resources was of paramount concern. Of course these incorporated specialized texts graded by reading age but I mean to stress the importance of variety, depth and breadth in effectively fuelling lessons, whose thirsty engines were Listening, Speaking, Reading and Writing.

I'd have found it prejudicial and self-limiting, either to advertise a lesson objective or prepare differentiated work. An English teacher who commits to articulating an objective must not be surprised if: (a) that is all that's accomplished ; (b) multiple unpredictable opportunities are preempted and (c) fluid, in-lesson, individual differentiation is rendered impossible.

For me, the lesson's content is a fresh, varied stimulus open to all that dignifies the group as people who matter equally and who may respond according to each one's lights. My job is to conduct a running exercise in subtle differentiation, an exercise that will have been ongoing on multiple levels since I met the group and contribute to awareness of objectives for group and individual I'd not flag up to either because I've long been convinced students learn more naturally when they forget they're being taught.(Indeed, at all levels, I've taught some of my most effective 'lessons' in dinner queues and playgrounds).

I have a lot of time for rank orders. The least useful, practically, is the received list of last year's exam grades which usually inform me only how a student read and wrote under exam conditions months ago. I ignore these into the same oblivion as the name of the group or set. My teaching is the more immediate if I view a given group as the only one in the world rather than the 4th of 6 sets.

The reality is that every group has ranges. Exam grades are one of many. I'd maintain that knowing your pupils means you can close your eyes in the staff room or late one night in bed and think: "Listening. Rank order most receptive to least, my Year 7's. Go."  I think it the English teacher's job to maintain such mental and fluid rank orders for significant aspects of the subject, from ability to deploy the colon to poetic language sensitivity, imaginative engagement, and reading aloud. I'd not write these down - as a pupil is his or her own living data base, I'm the dynamic data processor. What else should occupy a teacher's mind but student and subject?

I'm only appropriately interested in grades external to a given group when end-of-year  or external exams seek to compare my students with others. The only time I'd mark to external standards would be in mock exams, as part of my duty to prepare pupils for this special task. My teaching would change radically likewise. Training to perform in written examinations calls for directed, objective-led lessons of advice, familiarization, technique, revision strategies and realistic exercise.

Children are like adults. We tend to be more forthcoming when we feel valued. We are Billy Caspers all our lives - suddenly, amazingly fluent when our personal 'kestrels' are appreciated by a group peaceful in its achieved dignity. And I pray, are we Ralphs on this Lord of the Flies island, civilized in the belief every man woman and child has the right to take the conch in hand and enjoy fair hearing however apparently inarticulate.

I'd returned to the school that January as Head of Dept (after secondment and a year elsewhere) taking on a 4th year (Year 10) CSE group. Having realized by then that the quickest way to get known in a school is to produce a play, I dramatized a spin-off paperback of the hit of '76, "Bugsy Malone", secured Alan Parker's permission, got the green light from the Head and announced auditions in assembly.

I could have cast the play fully five times over, such was the response, including all the boys in my CSE set who, on hearing I had a script of a film they'd loved, asked to read it in class. West Midland (rough-cut) diamonds to a man, they'd never acted before, but read aloud in class with a surge of imaginative engagement never before evinced. I knew I had the makings of Fat Sam and Dandy Dan's gangs.

Limited as they were academically, these lads had street and sport cred which they deployed to draw in others. Faced with an embarrassment of riches I doubled up on the female leads and Bugsy who would perform alternate nights.

I can't remember why, but that July afternoon, members of the cast had gravitated naturally to the centre of their world. I can see them now. Costumed, they sit or stand about the darkened hall, talking fitfully, glancing now and then up at the illumined stage. And I too, unusually, find time to reflect.

How far had we come since Easter! I thought on the groundswell of support from every quarter. Of the music master who composed our songs. Of the design department's weeks of experiment to invent and then replicate splurge guns that worked, turning the playground into a firing range. Of the depth of trust and validating insight from a management that understood this was curriculum on a par with the most academic of classes.

Mostly I mused on transformation. I chose the word dignity for this celebratory post because that is what I perceived in the bearing of some boys become young men, awaiting the evening's performance with a grace in the step and a song of self-esteem in fearless hearts.

Here are some of them, caught in aspic, from my late dad's scrapbook. I wish all teachers in service and students at school similar legacies of dignity from doing what they will.

Just some of the Gang 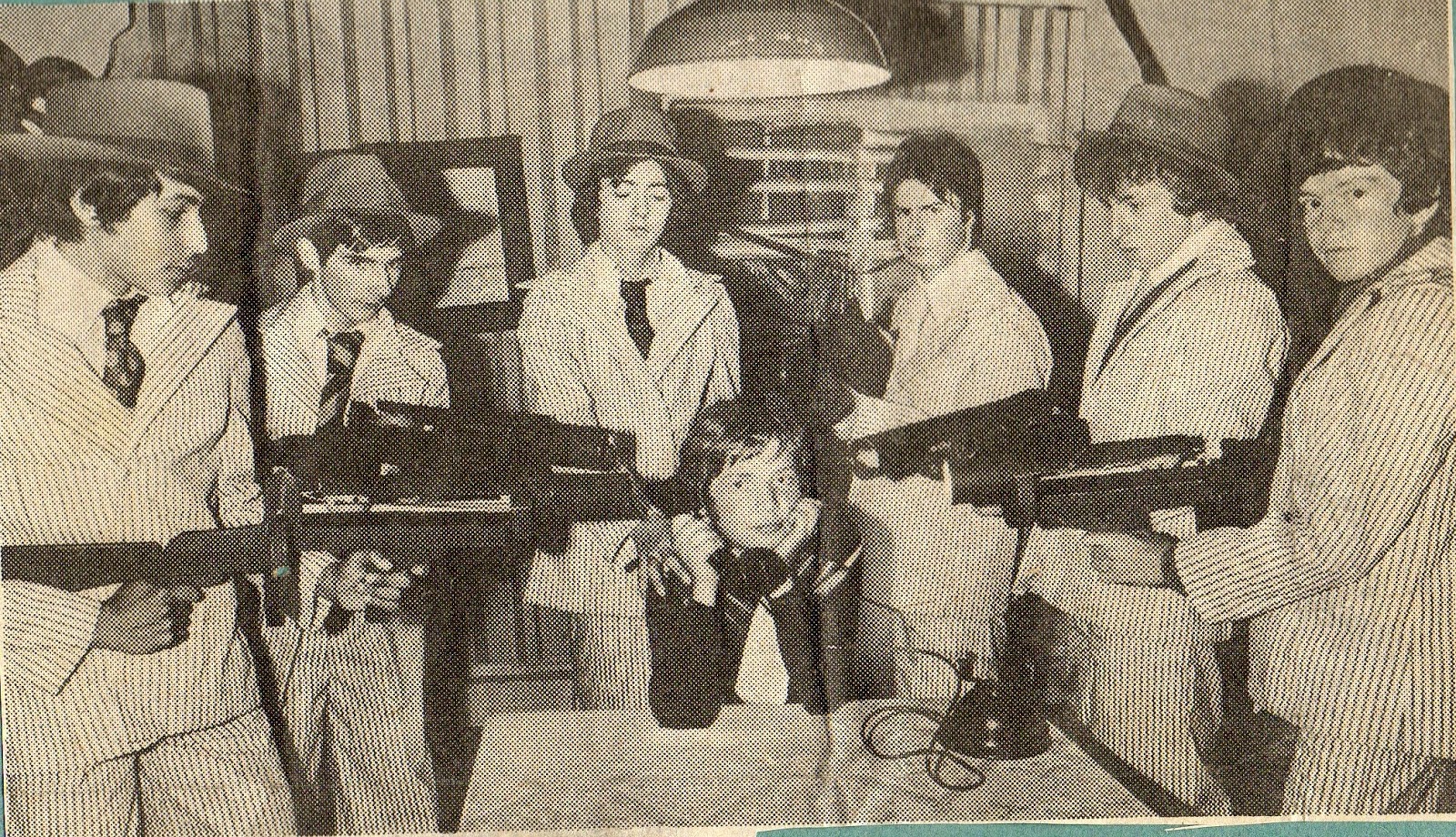 And, of course, Bugsy & Molls. 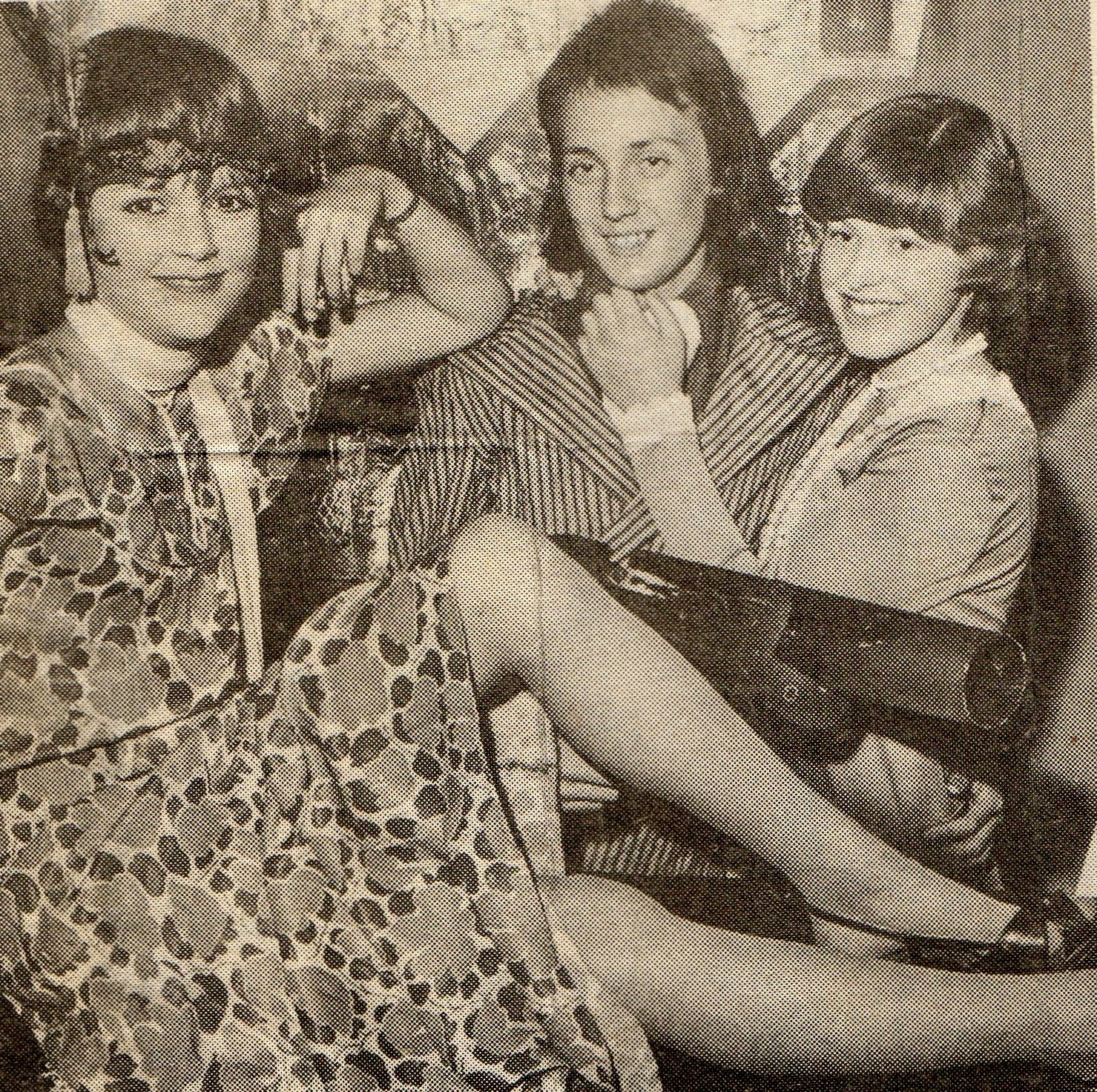