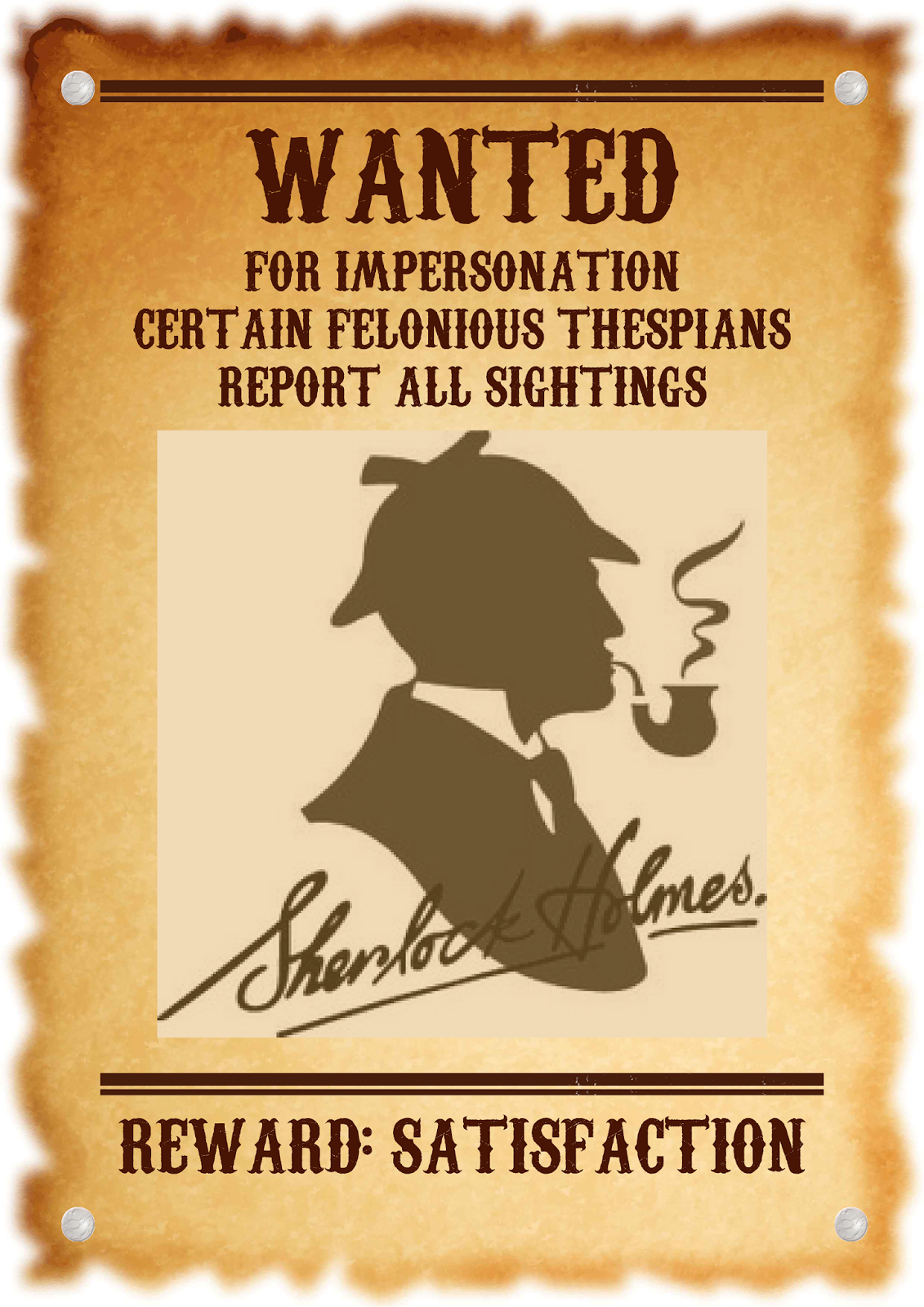 No case is cold in Sherlockian investigation and I therefore close this series of Sherlock Holmes Spotting with a small group of performers who have proved especially elusive. All are known to have impersonated Mr Sherlock Holmes but their files are regrettably slim. Hence, I detail here what little is known in the hope more in the way of biographical information, sightings, even photographs may come to light. Please report any new information here or to your nearest Sherlockian.

Our first fugitive is known to have been active in the Glasgow area in the late Spring of 1894 with confirmed sightings (at least for a week) from May 28 when, with numerous accomplices, he masqueraded as Dr Conan Doyle's detective upon the stage of the Theatre Royal.

The second person ever to portray the Great Detective, he did so in conspiracy with Mr Charles Rogers whose play, "Sherlock Holmes: a Psychological Drama in Five Acts" had claimed stage copyright through a performance at the Theatre Royal, Hanley in December, 1893. An eye-witness from The Era reported John Webb played the part "earnestly and with much success" and secured a valuable list of his accomplices:

To these must be added one Henry Cordyce who, in concert with Hamund, managed the operation. Cordyce and Rogers have past history as the 1000 Reward Company active in 1893, a prior association that, with further research, may yet yield some trace of Webb himself.

I seized my Thread.

Arthur Lyle (Wilton Hursher in the play) has served as a fresh trail to follow...initially to Brighton in 1889, where he was recognised upon The Royal's stage in the guise of Justinian in Monday, November 18's premier of "Theodora".

The drama is an English version of Victorien Sardou's original (famously acted by Bernhardt), written by Robert Buchanan for the American actress, Grace Hawthorne (Nathaniel's niece) who purchased the rights from Sardou. The notes that follow are extracted from the excellent Robert Buchanan website (see HERE ).

In this lavish production (it boasted two tame lions on stage), Lyle had as fellow actor Fuller Mellish who would, years later, appropriately, appear as Sidney Prince in Gillette's Lyceum "Sherlock Holmes". Neither actor tours with the company for much of 1890. Mellish is back (and admired) as Andreas, the Greek, from September.

The Stage for 19 February, 1891, reviewed the play's first night at London's Pavilion. On stage with Mellish is a new addition to the cast, playing "the illustrious general, Belisarius" - John Webb is described as "commendable".

By the time the play opened in Newcastle-upon-Tyne (as detailed in The Stage for 23 April, 1891) Webb has been promoted to "an excellent Justinian".

Though not specified in The Stage's brief review of a Dublin Gaiety engagement (28 May), I take it John Webb was still in the cast at that time as his subsequent departure is commented upon in The Stage's review of the resumed London run at The New Olympic (6 August).

The Observation of Trifles.

Where minimal data exists as in the case of the elusive John Webb any morsel, however insignificant in itself is worth noting: "docket it", Holmes himself advises.

I do not know if this is the same John Webb: I think it at least possible, given the thread followed here and the sense that he would, by late '93, be a known, experienced candidate for Sherlock Holmes. I have only scratched the surface of these lines of inquiry and see two main directions for the future: the much better documented  Robert Buchanan archive may have preserved images of Theodora putting a face to Webb. There's also all the reason in the world to investigate that whole list of accomplices for more possible sightings of our elusive thespian. Meanwhile...

Time to call in Pinkerton's for my next thespian wanted for questioning inhabited that shadowy, glitzy world of turn-of-the-century American vaudeville. I give you Bessie B Beardsley, who, anonymous as she remains, would appear to be the first female to impersonate Mr Sherlock Holmes in any media. Here's what I know (and it's not a lot!) about the original Baker Street Babe.

Written by J Searle Dawley it was presented by and starred Sheridan Block as a highwayman. Set in the present in London, Block's three accomplices are the author, Harry Vaness and Ms Beardsley. Advertisements appeared in the New York Times (8 July) & the Indianapolis Journal (10 July) ( see HERE and HERE )

The fullest description that places the sketch in its vaudeville context appeared in the New York Clipper on 14 July. I reproduce it below. As yet, no photograph or further information has been detected.

On September 20 1911, five days after the death of Thomas Kingston (see my previous post), London's Kingsway Theatre hosted (for 2 performances only) "Sherbet Jones; or Who Stole the Roller Skates" with Hugh Robinson (Sherbet Jones) along with Ernest Thesiger (Dr What's On) & Miles Malleson (Professor Goryarty).

The London Evening News reviewed it the next day (see HERE ).
Robinson is described as a "Cambridge Humorist"  who has put together "an undergraduate's lark" which includes a satire on musical comedy "The Girl with the Cash" and his "Sherbet Jones". He plays the famous detective "well...very youthful". We are told his little company includes a capable eccentric comedian in Mr Ernest Thesiger". The audience, largely of friends, enjoyed the show, but the reviewer sees no serious future in it.

Slight and brief as was its existence, the play has two features of special interest. The first, of course, is the subject of this post - what did Hugh Robinson look like in the role or any role? The second lies in the considerable historic interest for theatre history in the presence of two far more famous actors. This is Thesiger's first year on the stage (maybe his first public production?) He'd go on, like Malleson, to become a well-loved, highly respected actor of stage and screen. I suspect Miles Malleson was the connection as I believe he was at Cambridge too.

I have found two further references to Robinson's stage career:

(1) On December 16, 1913, he was in "One Afternoon" on Eastbourne Pier with Harry King, while Thesiger was playing Roderigo in "Othello" at His Majesty's. (see HERE ).

(2) In October, 1916, while Thesiger was in "A Little Bit of Fluff" at The Criterion and Brighton's West Pier, Robinson was at The Garrick in the review "Looking Around". (see HERE ).

My apologies for the absence of illustrations in this post - but that is the point. I should love to be able to return to these early impersonators of Sherlock Holmes and at least put a face to them.

I can, however, close with TWO images :- 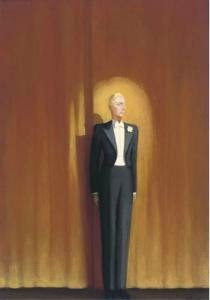 That indefatigable Pinkerton Agent, my American Sherlockian friend, Howard Ostrom, has recently put out a call for information on a more modern actor as mysterious as John Webb:

Who the hell is Burt Grosselfinger pictured here in Howard's collection as a Sherlock Holmes of indeterminate date and context?

The game is always afoot!