"The Letter Edged in Black" - Framing "The Final Problem". 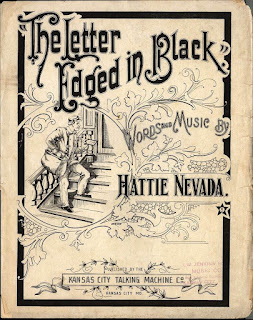 “Some deep organizing power” – Professor Moriarty and Conan Doyle’s Imagination.
Because the post will focus on the presentation of Professor Moriarty in this crucially important moment for the Canon, a preface about the nature of the story seems useful.
So: please follow me through three movements as prelude to The Final Problem:
1. Hattie Nevada's song & Robert Hansford's slides.
2. Conan Doyle's letter edged in black.
3. Mementi Mori-arty. 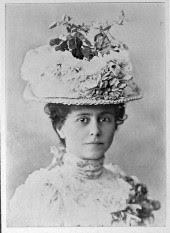 1. Mrs. Harriet (Hattie) Nevada Hicks.
In 1897, Hattie Nevada, an unknown amateur songwriter of Kansas City, Mo., wrote a tear-jerking song that made her name. Tim Gracyk has a detailed blog post about her early recordings HERE . Listen first to the earliest available recording of her song  A Letter Edged in Black recorded in 1925 by Vernon Dalhart.
By coincidence there lived in Kansas City at that time the pioneer photographer, Robert B. Handsford who produced in 1897 probably the first series of handcoloured song slides ever made West of the Mississippi. They illustrated Hattie's song and may be viewed as pdf. in an excellent article of The Kansas Historical Quarterly HERE .

Evidently the good citizens of Kansas City, Mo. were (like the playwright, Webster) "much possess'd by death." As were those of the state of Kansas, itself on their Western border. Especially were they interested in post mortem photographs  of dead criminals. Witness the proof of a threat removed given by this shot of the infamous Dalton Gang taken in 1892.

2. Conan Doyle's letter edged in black.
Conan Doyle's readers also had what we may feel is a somewhat morbid fascination with the dear and not-so-dear departed. 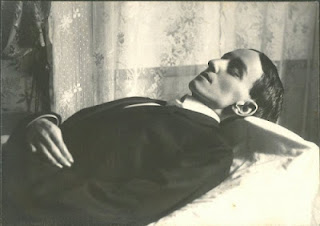 The photograph above is one of many preserved on internet sites. I shall spare you any example of the most prevalent subject represented - children. Search the term "mementi mori on Google Images and you will find them soon enough. 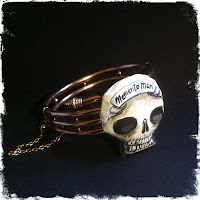 Mementi Mori means literally 'remember you are to die' and such Victorian warnings of our universally common end came in various forms.  Cabinet photographs of loved ones taken before burial were supplemented by such objects as Gothic skull pendants and rings, hair from the departed incorporated in a brooch or needlework, all deriving from a practice going back centuries.
Before all this of course you must break the sad news. Conan Doyle's express purpose in shaping The Final Problem was to do just that. 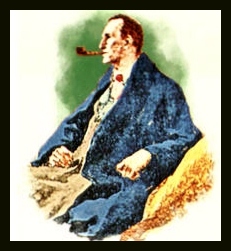 The pictorial equivalent of The Final Problem.

Every element is designed to bring closure to a fictional character with dignity, empathy for the reader and sterling literary pains. It is a 'letter' (from Doyle) with the blackest of borders. 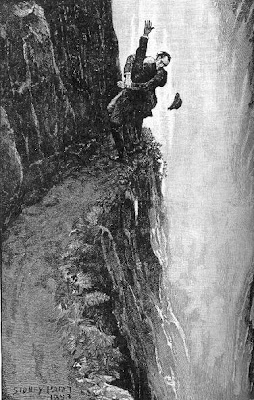 In this case, the 'borders' are starkly, immediately apparent: no title in the Canon is less ambiguous than 'The Final Problem' ; no illustration better positioned than the Paget image located  first and before its narrative. Watson's funerial and eulogistic prologue and epilogue will intensify black already on the canvas.

Painfully aware of the devastating impact his story will have, Conan Doyle summons all his constructive powers to deliver the news without submitting the reader to real time or unexpected description of the Great Detective's demise.

Watson's reminiscence imparts a bearable distance (rather in the way today's undertakers dress and pose a corpse in semblance of life.)

Knowing Holmes is dead, our attention is turned to how and why. Doyle engineers the narrative in such a way to incorporate Holmes himself as central narrator of the most animated phase of the story which I see (fittingly) as Alpine in shape. 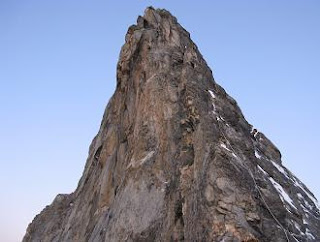 It is a veritable Eiger that Doyle, Watson and Holmes scale together...at whose peak looms from the summit mists arguably the greatest Arch villain in English Literature.

From the foothills of Watson's poignant, reminiscent prologue the reader climbs to the central massif of Holmes's account of Professor Moriarty whose apex is their momentous and unique meeting in 221b.

What follows is prosaic after the prose poetry of Holmes's record. The foregone conclusion is played out as we descend from the heights and return with Watson to contemplate "the best and wisest man I have ever known."

In the hands of a less skilful and less caring writer The Final Problem would exhibit sensationalist, cheap shock tactics, masking the fact of Holmes's death until it was enacted in bloody detail - thus pushing the reader off an emotional precipice not of his choosing.

This was never Doyle's way and, as if predicting the black arm bands worn in London streets upon publication of this final story, instead he buckled down and gave of his best, creating in the process He who is the subject of my forthcoming post.

Finally, and briefly, I would remind the reader of two things:

a) The Final Problem communicates news of TWO deaths, and in neither case has any undertaker, in Doyle's own words, "pronounced on the body".

b) As I shall argue in my next post (see link below),  it is highly unlikely we should ever have heard of Professor Moriarty if Conan Doyle had not decided to kill Sherlock Holmes.
There would have been no Empty House; nor opportunity for a magnificent, illustrious band of screen actors to portray the Napoleon of Crime.
Just a reminder then to close - a memento mori-arty of the finest I have personally seen.