The Doyle Bust Business (Part One).

In his own time, Sir Arthur Conan Doyle was one of the most well-known, instantly recognizable Britons in the World, positively Beckhamite in influence and fame.

Sherlock Holmes contributed significantly  to Doyle's international celebrity status, an effect compounded by a readiness to believe in him as a real person and the equally erroneous identification of character with creator.

While he lived, the writer was the more prominent; his death brought Holmes to the fore: a shift manifested tellingly in the world of sculpture. Statues and busts of the detective are much more in evidence today than are effigies of Conan Doyle.

This post and the next form an initial attempt to record the provenance and location of all extant busts of the writer executed in his lifetime. It is an on-going project and I should be grateful to receive any relevant additional information.

The head and shoulders sculpture illustrated above is one of the best examples I know of modern busts of Conan Doyle. This endearingly Watsonian image is 15" tall, near life-size, and done in cold-cast bronze over resin. It's an edition limited to 1000, by the British artist, Peter Close. Ars Praestigium Galleries are currently offering it HERE on Ebay.

Bookends to a Knight's Tale. 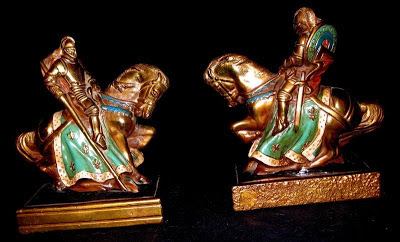 Two significant sculptures frame four decades in the public eye in the life of this latter-day knight: the Thornycroft bust of 1892 and the Davidson of 1930. Both have survived, though neither as I write is on display.

A Scandal in Bohemia was published in The Strand's July, 1891 issue. By 1892, aged 33, Doyle was famous. Hamo Thornycroft, nine years older, already uncle to a six year old, Siegfried Sassoon, was already a leading proponent of what the critic Edmund Gosse would term The New Sculpture two years later.

A member of the Royal Academy, Thornycroft was responsible in the years following 1884 for some of Britain's best-known statues: Cromwell outside Westminster Palace, Alfred the Great in Winchester & General Gordon for Trafalgar Square.


This statue, minus its plinth, is now re-sited on the Victoria Embankment, London.

Of the commission and early history of the Thornycroft bust of Doyle I know nothing. It is my hope vastly more knowledgeable Sherlockians will be able to shed some light.
What I can do is to describe the work and identify its location in 2010 when it passed through Philip Weiss USA Auctions.


Sir William Hamo Thornycroft Marble Bust Sir William Hamo Thornycroft (British 1850-1925) Marble Bust of Sir Arthur Conan Doyle. Sir William Hamo Thornycroft was the initiator of the "New Sculptors". He had visited Italy in 1871 and admired the work of Michaelangelo. Returning to react against the still formality of neo-classism, and the sentimentality of the romantic style. His life-size bronze Teucar of a naked archer (1881) changed the course of British sculptor. This work created by Thornycroft in 1892, was at the time that Sir Arthur Conan Doyle became highly successful in the creation of Sherlock Holmes. This is a great work by Thornycroft. It is signed and dated at the bottom side of the bust. There are some minor issues with the bust, small chip on collar. The marble is a bit soiled and there are some other minor chips along the way. Other wise in very good condition for its age. Measures: 25" X 20" X 16".
The post-sale report says:
An 1892 marble bust of Sir Arthur Conan Doyle, the creator of Sherlock Holmes, by Sir William Hamo Thornycraft, the initiator of the “New Sculptors,” went for $4,520. It is signed and dated at the bottom of the bust.
Who bought it is unidentified; nor am I aware of the bust being on public display.
Much more detail may be given about the 1930 bust by Joe Davidson and this is the sole topic of Part Two to follow.
Meanwhile, this is perhaps the best place to note one further possible candidate as a contemporary bust sculpture of Sir. Arthur Conan Doyle. 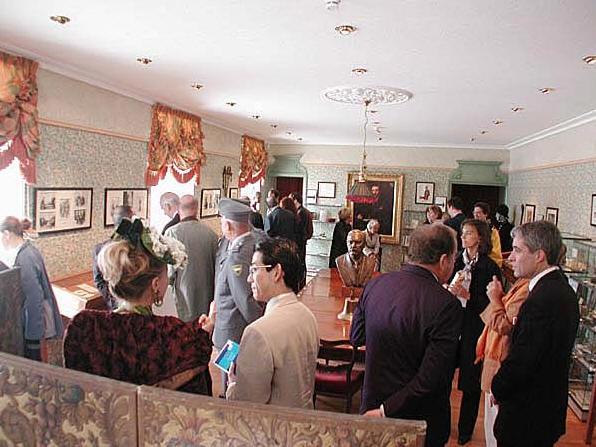 This is a photograph taken in the Lucens Sherlock Holmes Museum. Switzerland. The centrepiece of Conan Doyle's own magnificent table is a bust of the author.

I should appreciate any further information as to the age, artist, material and provenance of this sculpture which may reasonably be a third executed in Conan Doyle's lifetime.

I leave the reader in no doubt as to my motive in writing these two posts - any author who begins and ends his career sculpted by the foremost artists of his time in my book stands (literally and metaphorically) head and shoulders above most of his contemporaries. He and buildings like Undershaw associated with him deserve all the respect due to a Great Briton.