A year or so before his May 1916 visit to the Front, Conan Doyle embarked on a lecture tour to boost morale. As the List of World War I Battles indicates, 7 months of war had provided a tragically rich fund of material for the lecture entitled "The Great Battles of the War".

From Tunbridge Wells on February 20th, his itinerary took him to Scotland by March 10th, Queen's Hall, London on the 20th and so to Harrogate, my North Yorkshire home town, on the 22nd. The tour and its dates are detailed in three letters to Mary Doyle, written in February & March.

As I read these letters I realised they provided a basis and motivation to research the author's connection with Harrogate. This post details what I have discovered thus far - some of which has rather taken me by surprise. I'll present my findings under three sub-headings: Doyle's Harrogate, The Other Dr. Watson and One Degree of Separation.

If only in imagination, Conan Doyle had 'visited' Harrogate before. In 1891, J. S.Wood persuaded 24 writers to write a chapter each of a novel published in his weekly magazine, The Gentlewoman. Without consulting each other, authors of both sexes wrote alternate chapters of "The Fate of Fenella", including Doyle's Chapter 4 and Bram Stoker's Chapter 10. The Prospect Hotel (shown) figures in the novel, along with Harrogate's famous Pump Room and Valley Gardens a short walk down the hill. 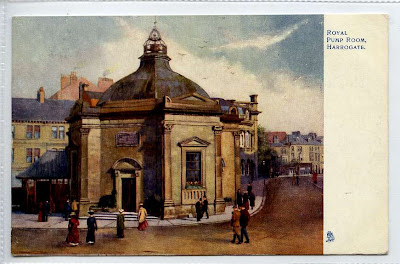 Given Harrogate's importance as a Spa, Conan Doyle's first profession and acquaintance with his tour host, it would not be surprising if evidence emerged of visits prior to the 1915 lecture.

As things stand, Monday, March 22nd found him on the stage of Harrogate's Kursaal. Built in 1903, with considerable input from the great theatre designer, Frank Matcham, the Kursaal was a "Cure Hall" in every sense, providing those who came to take the waters with daytime and evening entertainment as well as continuing the sale of waters from its own spa spring, incorporated in the vast venue.


In a letter to Mary Doyle, her son mentions 'a huge house' gathered for his lecture. He was in illustrious company given the List of Performers since 1903 - Vaughan Williams and Pavlova had appeared there in 1914 and Lily Langtry followed Conan Doyle in May of '15.

It seems in keeping with the spirit of Doyle's patriotism that I conclude this section with an invitation to read an article on just one Harrogate man who died in battle - the composer E.B.Farrar, A Bright Hope of English Music and listen to his 'Heroic Elegy - for Soldiers' :

The venue could not have been handier - Conan Doyle was 'putting up with Dr. Bertram Watson', as he wrote to Mary from the Midland Hotel, Bradford. The good doctor lived at 2, Ripon Road, about 50 yards behind the camera in the image above. This address heads the letter Doyle wrote to Mary before travelling on to Shrewsbury.


Dr. William Bertram Watson was certainly a medical colleague though I am assuming some prior acquaintance given Doyle's resort to a hotel in Bradford, but not in Harrogate. This Watson headed the Harrogate Medical Society for many years and was heavily involved in the spa treatments. His specialism was the treatment of sciatica and I append below links to articles by or about him in the British Medical Journal, which, in April, 1912, describes him as M.D.Lon., and "Honorary Physician to the Yorkshire Hospital for Chronic and Incurable Diseases, Harrogate."

Thus far in my researches I know, ironically, little of him, much more of his wife. The BMJ dutifully records his death aged 70, eight days before I was born in 1948. He died January 12th in Gibralter. The funeral took place there on the 14th with a memorial service at St. Peter's Church in Harrogate on the 21st.

Hence, born in 1878, Dr. Watson was 37 at the time of Doyle's visit in 1915. [Until I can confirm this date of birth it must remain provisional as it is at odds with the age given for his marriage in the Daily Mail article cited below.]

December 1905 sees him living at Mont Laurel, Harrogate, a Physician & Surgeon (according to this London Gazette entry, in which he is joint-executor in the estate of one Harriot Pinnington.) I suspect this was the original name of 2, Ripon Road.The March, 1906 BMJ article by Bertram Watson confirms his post with the Yorkshire Hospital named above.

My last section will confirm his marriage in November, 1910 and the birth of two children to William and Pauline Bertram Watson: Ruth in 1911 and Paul in 1916. It will also provide the only evidence I have so far that he had a regimental history.

But Pauline will now take centre stage for her story has a personal dimension I had not expected to encounter. I had better introduce my father to the reader.

3. One Degree of Separation.

While Sir. Arthur Conan Doyle lectured in The Kursaal that March Monday, my father was (hopefully) sleeping like the eight-month-old babe he was a few miles up and off the Ripon Road in a Dales mill village. By the end of the Great War, his family would move from the centre to the edge of the village. That's their home in the image above at the far end of the terrace from the Methodist chapel they would take care of for the next half century. (It's now a house.)

He's still in Harrogate, 99 in July, hale and hearty. He likes a drive round the town when we go out to lunch. A month ago, we passed 2, Ripon Rd and I told him about Conan Doyle's visit in 1915. Later, over lunch, I mentioned Bertram Watson.
My father remembered him as a well-known and rich local figure. "And you worked for his widow," he said.


Before leaving Harrogate for university in 1966, I had a Saturday job gardening and cleaning the yard for an American lady called Watson. Dad's remark gave this research a fascinating new direction and, 47 years late, I now know I worked for the lady who welcomed Conan Doyle into her home in 1915.

Dad was a gardener. He had worked for her as her flat was just down the road from our nursery. "She was a very regal lady", he recalls. No wonder - when you hear her story.

My Mrs. Watson was engaged on September 4 , 1910, and married William in her home town of Portland, Oregon. The Sunday Oregonian of November 13th reported the wedding two nights earlier:


Click this link to read the full report on p36 & 37: Marriage .
The report says the happy couple are to sail for their new home in Harrogate on November 26th, by White Star Line on The Baltic from New York. Please click HERE to see details and a fabulous magnified panorama of The Baltic moored at The White Star dock in New York Harbour. 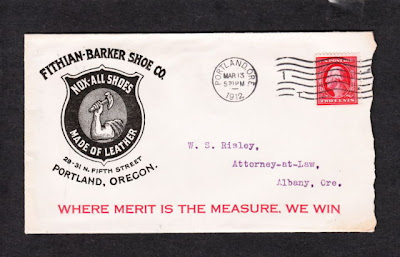 William had married well for Pauline's family were rich and very prominent in Portland society. That very year, her father, Orrin H. Fithian, businessman, had been so successful in shoe-making that he went solo, setting up the Fithian Barker Shoe Company, the third largest manufacturer of shoes in the World. Please click HERE to read a detailed history of his businesses and family history.

The Fithians were descendants of early Oregon settlers and one senses this spirit in Orrin. Totally devoted to his business, it's clear from the society news that he leaves his wife to run a full social calendar. She is also often reported on vacation alone or with friends in The Bermudas and elsewhere.

I do not know where or how William met Pauline (or Conan Doyle for that matter) but the trusty Sunday Oregonion of May 22nd, 1910, documents a visit to Europe to be undertaken by Pauline and her mother that Summer. Perhaps they took the waters in Harrogate? Or, more romantically, perhaps William also happened to attend that year's Passion Play at Oberammergau to which Pauline and her mother were headed.

There is no doubt such a family travelled First Class and it is fortunate indeed that the new Mrs. Watson is reported back for a Portland visit in May 1913 - a year earlier would possibly have found her on The Titanic. She travels, like her mother, without her husband (I suspect to show off baby Ruth) and is the toast of all Portland society on her return.

To read the society columns of the Sunday Oregonian is to realise each period has its own version of Facebook & Twitter.
August 30 1914 sees the paper actually report the contents of a cable from Mrs. Fithian to her daughter in England, imploring her to get out of the country with her baby as soon as possible. She expresses the fear that William Watson will be called up by his regiment along with anxiety that passage may not be allowed now that Pauline has British nationality.
The looming war would also separate mother from son. 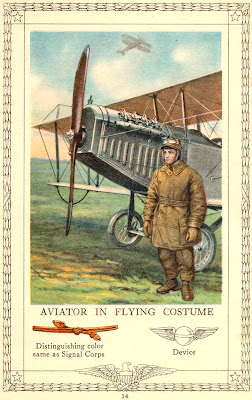 Pauline's brother, Robert, was a Lieutenant in the Aviation Corps. Read his Letter from Deauville written August 24, 1918 to his mother. It makes reference to sister, Pauline, in England, and he expresses regret that he will be unlikely to be granted permission to cross the Channel to see her. The letter is a moving snapshot of the impact of war on one family.

"Time present and time past
Are both perhaps present in time future,
And time future contained in time past."
(Burnt Norton. The Four Quartets. T.S.Eliot).
I recall the Widow Watson as often unwell when I arrived for work, but was not aware until now that she passed away on the 7th November, 1966, during my first university term. The London Gazette records her married and maiden names, her address on York Place and the names of her children, executors Paul Bertram Watson and Ruth Watson Green.

Reflecting on her life and my short association with her it is gratifying to record her legacy. She gave me more than the National Geographic magazines kindly passed on (received from America): she afforded me one degree of separation from Sir. Arthur Conan Doyle I never appreciated until today.

More importantly, she left her family with an enduring reminder of a vanished age - that wedding dress described by the Sunday Oregonian has been passed lovingly down the generations. It is of considerable historic importance as these two modern news articles indicate:- if you read Daily Mail Article & Wilmslow Express Article you will see just what I mean.

One further delightful connection before I conclude: in 1963 the actor, Geoffrey Palmer, married one of Pauline's grand-daughters, Sally. She wore the 1910 dress walking down the aisle with an actor who played Sherlock Holmes (in The Mask of Moriarty).