221b didn't have one. Nor, it may be assumed, on a policeman's salary, chez Lestrade. There's one in Baskerville Hall and the Canon records further examples at Victor Trevor's Donnithorpe home, Musgrave's Hurlstone, Milverton's Appledore Towers and behind the Palladian pillars of Sir Eustace's Abbey Grange.

A billiard room was deemed essential in the house that Arthur built, Undershaw. And here is John Dickson Carr's description of the great billiard room at Windlesham:
"Windlesham, set in the then lonely open country which stretched from Crowborough Beacon to the Sussex Downs, had been greatly changed and enlarged from the modest country-house he bought before his marriage. … From far away you could see Windlesham, with its five gables, its grey-painted shingles and white window-frames, its red roof-tiles and red chimney stacks …
Above all in their minds at Windlesham, then as afterwards, was the great billiard-room which came to be filled with so many memories. This billiard-room ran the full breadth of the house, east to west, with a wall of windows at each end. A hundred and fifty couples could dance there when the rugs were cleared away. Conan Doyle had it built into the house as their living-room, the centre of their lives. At one end, amid palms, stood Jean's grand piano and the harp. At the other end was his billiard-table, under the muffled green canopy of the table-lights. … Over one fireplace hung the Van Dyck … over the other was a stag's head he had brought back from the Boer War. Round the walls, blue-papered, ran a frieze of Napoleonic weapons. His own portrait, by Sidney Paget, hung among them." (from "The Life of Sir Arthur Conan Doyle" by John Dickson Carr, pub. John Murray, 1949).

In his own "Memories and Adventures" Doyle wrote "Surely billiards is the king of all indoor games."  It was one of many life-long passions and I fancy I catch the young author fantasizing in this passage from the early (1891) novel, "The Doings of Raffles Haw":
"But why do you call it a billiard-room, Mr. Haw? I do not see any board."
"Oh, a board is such a clumsy uncompromising piece of furniture. It is always in the way unless you actually need to use it. In this case the board is covered by that square of polished maple which you see let into the floor. Now I put my foot upon this motor. You see!" As he spoke, the central portion of the flooring flew up, and a most beautiful tortoise-shell-plated billiard-table rose up to its proper position."

English billiards is a game of great skill and requires regular practice to advance. ACD was good enough to play in the Amateur Billiards Championship, losing in the 3rd round on 15 February, 1913 at Messrs. Orme & Sons Hall in Soho Square. The Billiard and Snooker Heritage Collection gives a "potted (yes!) history" of the firm HERE .
In March of that year Billiard Monthly carried a report on ACD. It is well worth following THIS LINK as, although the photographs have been disabled (copyright issues?), a scroll down the page will bring the reader to a rare Sherlock Holmes pastiche with a billiards theme: "The Mystery of the Three Grey Pellets" by Laurence Kirk.

Before I move from the real Doyle to the fictional Thurston, HERE is a very spooky anecdote from (yes that!) Richard and Judy.

It is, of course, at the beginning of The Dancing Men, that Holmes deduces Watson does not propose to invest in South African securities and apprises the reader of a hitherto unknown acquaintance of the good Doctor's, his (sole) billiard partner, Thurston. We never meet him in person, nor is he described. Prudent and perhaps cautious, Watson has let the option to invest expire. This is no close friend and the lack of intimacy reinforces the general Canonical impression that Holmes and Watson (pace the latter's wife/ves) have only each other. As does the very choice of name. 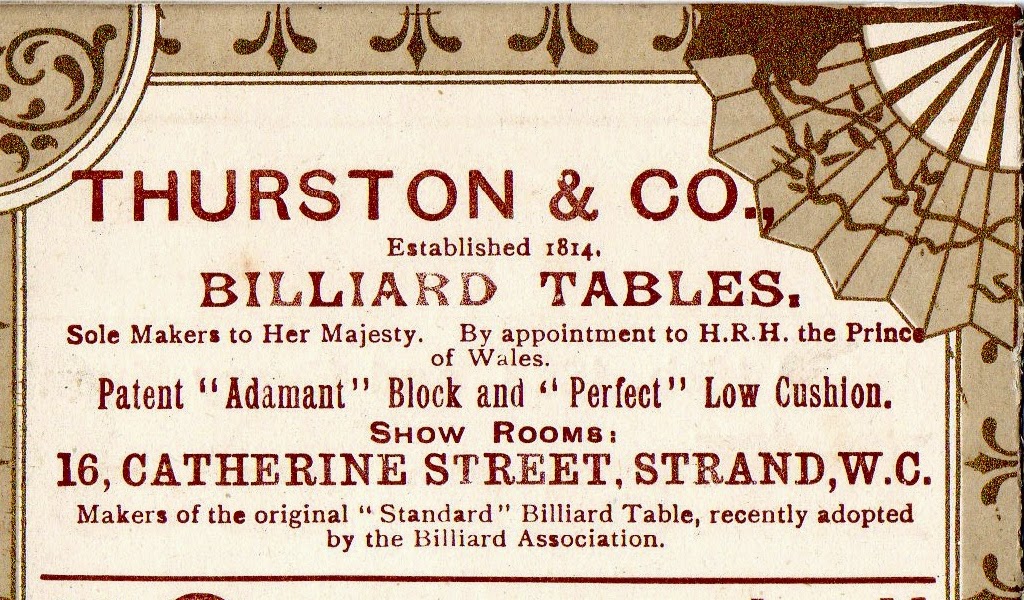 Famous as Steinway pianos, "Thurston" was synonymous in Doyle's day (and still is) with "billiards". The name would come readily to an author who played the game, had visited the firm's "Match Room" and knew that, from 1892, the Billiard Association had accepted Thurston tables as the "standard" by Royal Appointment. For me (and perhaps for Holmes) there is, in the generality of this name choice, a wry acknowledgement of John Watson's lonely private life - to play with "Thurston" is tantamount to playing anyone... or by yourself.

Billiard and Snooker Heritage provide a fascinating, superbly illustrated history of the firm HERE . J B Priestley provides an equally absorbing insight into Thurston's Billiard Hall in "At Thurston's".

From the window of the Diogenes Club (the story is The Greek Interpreter) Mycroft and his brother observe two men, one agreed to be a 'billiard-marker', evidence both know the milieu well. The job no longer exists but in Doyle's day was sufficiently recognised to appear on census, marriage and criminal records. At root, the marker 'marked up' the scores. Young teenagers were often employed as were men in their sixties. Often the position amounted to much more - billiard-markers ran competitions, managed the halls, refereed and would play if asked. (Doyle himself recounts such a game in his autobiography).

It is only logical to assume these precisely the kind of men Sherlock Holmes would cultivate in his detective work - Langdale Pikes of the billiard clubs and halls, with invaluable entrees into closed circles. As with concierges, butlers and commissionaires, such pivotal figures criss-crossed class borders daily, mining privileged information. Baskerville Hall's John Barrymore and Hurlstone's Brunton occupy similar positions of shadowy power.

On a personal note, such is the depth of Conan Doyle's Well of Suggestion in his short story style that I am sometimes tempted to identify Thurston as the resident billiard-marker at Watson's club. Equally, in this age of Oscar Wilde (and R L Stevenson) absence of detail conflates Thurston with Algernon Moncrieff's phantom Bunbury - a 'favour' I am sure many a discrete billiard-marker could be relied on to perform for suitable reward in Conan Doyle's London.

Scroll down THIS LINK for extracts about billiard-markers from Billiard News. Leo Tolstoy's 1855 "Recollections of a Billiard-Marker" may be read HERE .

I received today, in the most extraordinarily preserved condition, a theatre programme dated October, 1893. It's a forgotten play but the theatre isn't and neither is one of the advertisements.

Here they are, in one survival: A Study in Scarlet's Criterion ( that other 'acquaintance' of John Watson, young Stamford) and Thurston. 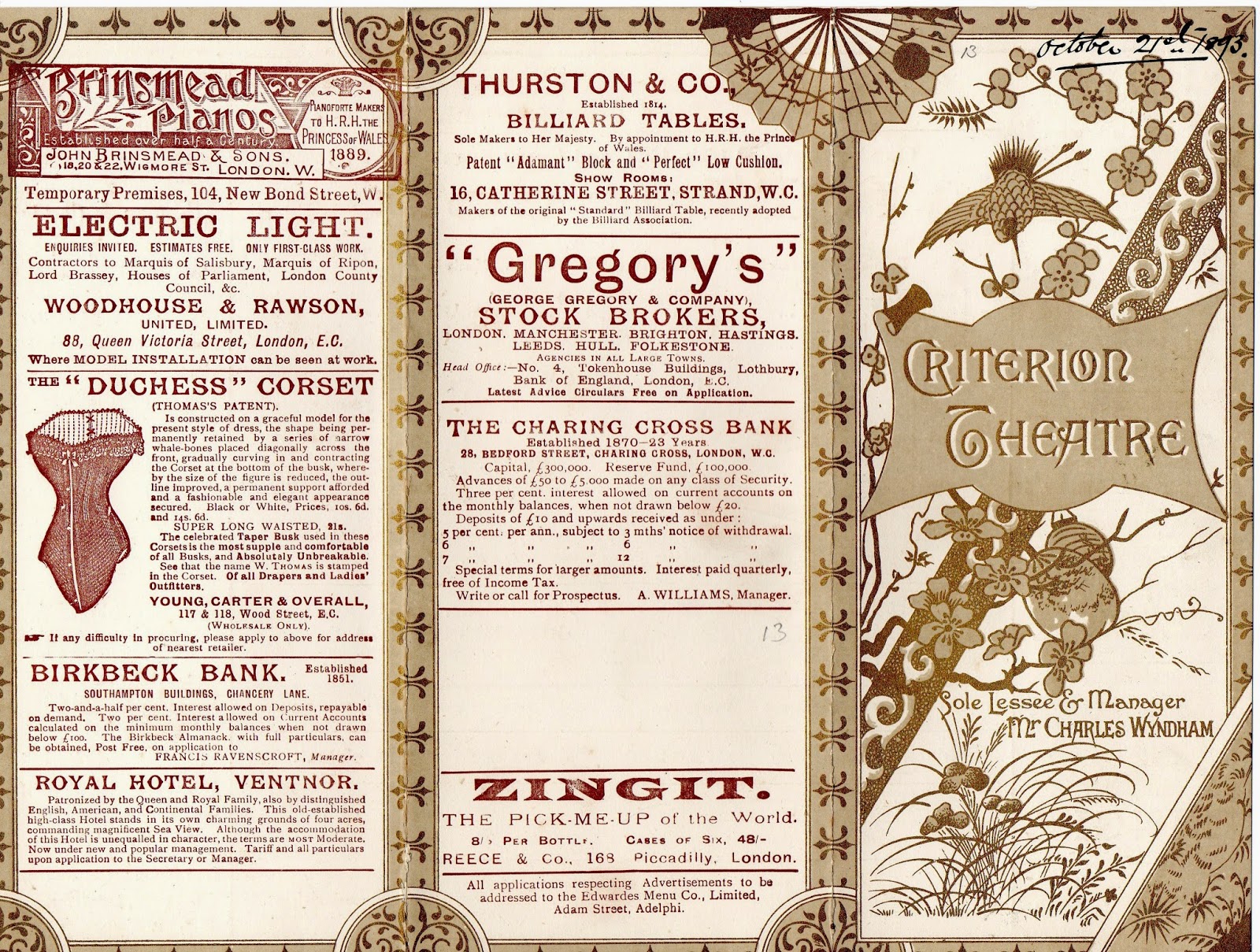