The film actor,Theodore Lorch, has largely eclipsed the illustrious man of the stage he became in the first decade of the 20th Century. Versatile and prolific, his face is familiar from cowboy films; from his appearances with The Three Stooges; notably as Chingachgook ( in the 1920 silent “The Last of the Mohicans” ) and especially as a High Priest in “Flash Gordon”, 1936. Lorch was 40 by the time his film career took off after the war. He had made but one short before it, in 1908, called “Shamus O’Brien”.

This post records evidence from news archives of Lorch’s appearances in the role of Sherlock Holmes between 1906 and 1910. For those interested, notes and links expanding on his life and activities on the pre-war stage follow.
Read More (This link will open as pdf ) 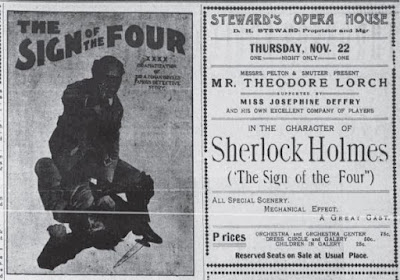