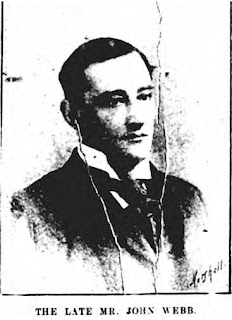 In November, 1893, Charles Brookfield made well-documented history as the world's first actor to play Sherlock Holmes in the hour-long revue, "Under the Clock". By contrast, next to nothing is known of the first Holmes to feature in a full length play. Written by Charles Rogers, "Sherlock Holmes: A Psychological Drama in Five Acts", starred John Webb in six performances at Glasgow's Theatre Royal in the spring of 1894. Hitherto, less than a handful of contemporary reviews have provided a cast list and tantalisingly brief comments on performance, but no clue as to the lead actor or what he looked like.

An accidental find, the image above and the obituary it illustrates prompted new lines of fruitful research. This introduction heralds three forthcoming posts that present the argument and evidence that lead me to conclude John Webb , "the Surrey Villain", was also 'the Glasgow Hero'. Sherlock Holmes.