Masks - A Scandal in Bohemia (Day One). 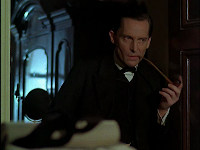 When Jeremy Brett's Holmes muses on Bohemia's discarded mask, he departs from the letter of the original but focuses attention on a major theme of A Scandal in Bohemia and a recurring preoccupation of the Canon.

On one level, Doyle's sense of the dramatic and frequent recourse to theatrical reference give his prose an immediacy akin to the experience enjoyed by an audience watching a stage play. Doyle, the playwright, is evident in his ear for dialogue and scene-like story constructions.

A Scandal in Bohemia plays with notions of disguise, costume and masking; of deception, alias and identity on deeper levels, with Shakespearian amusement. Whispered echoes of Twelfth Night and Romeo and Juliet swirl in the scandalous air.

A trio of actors tread the boards of our imagination, with varying success. In narrative order they are: Wilhelm, King of Bohemia, Sherlock Holmes and Irene Norton (nee Adler).
On Day One Bohemia enters ...into limelight.

In the unlikely event of the King meeting James Ryder (sometime Head attendant at the Hotel Metropolitan) they would have one thing in common:

Holmes to Ryder: " ' no; the real name,' said Holmes sweetly. 'It is always awkward doing business with an alias.'"

Ludicrous as Malvolio is Bohemia in masquerade as the Count von Kramm, reduced to melodrama as he tears off the ineffectual mask. And, as with Ryder (he of the servant classes) a King is reduced before the all-levelling eye of Sherlock Holmes. At a stroke, the detective renders both alias and royal status irrelevant.

Prior to the King's arrival we have been reminded  of Holmes's observational genius via Watson. Wilhelm has no idea what an examination awaits. Thus it is for all who climb the 17 steps. Visitors beware! You enter at a price: truth...just bring the truth. Time and again in the Canon Holmes urges client and criminal, Lord and Lady to give him the facts and trust him with the most uncomfortable truths. A chemical metaphor aptly conveys this central function of Doyle's creation: He is litmus paper dipped in souls. King Wilhelm is acid.

Quietly, without polemic, Doyle (who has mixed with kings and commoners) is here educating his audience to look beyond appearance. Bohemia may loom large, wear fabulously rich bling over a Herculean figure, but these are as showily devoid of real substance as the King's Gilbert and Sullivan-esque title: Holmes deliciously rattles off Wilhelm's full name, metaphorically tossing it aside as of no practical value.

Shorn now of regal dignity, Wilhelm is laid open to questions. Apparently lethargic, subtly satiric and utterly unimpressed by his "gigantic client", Holmes ferrets out the facts of the case, economically couched in a rapid exchange of stichomythic dialogue.

Seeing him now through Holmes's eyes we wonder what on earth could bring a king incognito to foreign shores.

Patently he, a reigning monarch, has left his realm to hunt down Irene Adler in person. Agents have failed him or cannot be trusted; panic and looming urgency have at length brought him to Baker Street. She must be silenced before next Monday.

Holmes trains us to treat Wilhelm's version of events with some scepticism. As Crown-Prince and now King, awesome power and regal charisma have muted the man within. He cannot act the Count because he is self-typecast as King.
Fascinatingly:
The wax figures of Irene and Wilhelm on display in The Sherlock Holmes museum catch an imagined moment in old Warsaw. So aptly is Wilhelm masked - Romeo manque. Even then he was never himself. Hence, at root, the real separation he unconsciously seeks is that from his own falseness. I doubt he succeeds:pity the Princess Clotilde.

Pity any woman who becomes entangled with such power vested in a man who, Lear-like "hath ever but slenderly known himself".

Irene Adler is doubly unfortunate: she played with his fire in headier days and Wilhelm can make or break her. The account he gives Holmes exemplifies the current danger she faces for the King in striving to appear the innocent party paints her in terms that impugn her reputation. This introductory portrait informs most film and stage representations of Irene Adler. I do not mean to suggest they err in this. Our tabloids bear witness to many a 'Celebrity' salting away a saleable story to cash in when an affair with someone seriously powerful and high-profile has run its course.

I take the King at his word on this. At the time of their 'entanglement' Irene was riding the crest of fame. The radiant prima donna of the Imperial Opera, Warsaw, and her playboy Crown-Prince offered each other precisely what the moment desired. 'Adventuress'? Yes. Courtesan? Highly likely.

Moreover such men can take their pick of the European crop. She must necessarily be an exceptional woman who attracts the attentions of hereditary royalty. Wilhelm acknowledges this but in terms he would not have employed back in Warsaw:

"She has the face of  the most beautiful of women, and the mind of the most resolute of men."

But, claiming that he has changed since their affair, the King does not allow for any change in her, despite the fact that she is retired from the spotlight and lives in seclusion in a new country.

Nor, more seriously, does he exhibit any embarrassment in disclosing the extent of the hounding visited upon Irene Adler. According to him she has refused to return or sell the compromising papers and photograph and he freely admits that Briony Lodge has twice been ransacked on his orders; her luggage has similarly been searched and twice has she been waylaid in person and subjected to search.

This revelation of scandalous and illegal conduct takes us to the nub of the underlying significance of Day One's narrative. Against the enduringly fascinating creation of Irene, the King of Bohemia pales into insignificance (shades of those failed suitors to Portia, the Princes of Morocco and Aragon).

Bohemia is created to throw light on Irene Adler, to show us what kind of man she has hitherto consorted with and to prepare us to appreciate her current, perilous situation. By the end of the story, we will concur with Holmes: from what we have seen of the lady, "she seems indeed to be on a very different level to your Majesty".

My next post will examine the events of Day Two and I now move from a blundering masquerader:


To a pair of consummate actors: