If her Majesty the Queen saw fit this Jubilee Year to extend the honours list to fictional characters, Sherlock Holmes would surely deserve a belated Knighthood.

Perhaps Conan Doyle never thought to 'knight' his creation  because he himself was a reluctant recipient.

Happily, Basil Rathbone sits at the Round Table with Hare and Doyle. His Holmes haunts all who essay to play the great detective. For Rathbone was an outstandingly good actor. Modern 'stars' know well that fame has its price. Very few are blessed with a touch of the chameleon - the ability to be unrecognizable in a role.

In the 1939 film, The Adventures of Sherlock Holmes, Rathbone is invisible both as Holmes and himself singing, 'Oh I Do Like to be Beside the Seaside':
http://www.youtube.com/watch?v=XmJVXHLjVhk

However, it was not always thus. And I ask the reader now to imagine the impact on Rathbone's reputation if his portrayal of Holmes had been confined to the theatre. Few would expect criticism like this:

"In the huge role of Holmes, Rathbone is a dismaying surprise."

"If the producers can persuade Rathbone to study his part and play Holmes rather than a House Dick, they can cure the major ill of the play."

These are quotations from a contemporary review of Ouida Rathbone's stage play, Sherlock Holmes, which ran for three performances 30/31 March, 1953 at New Century Theatre, New York City, after a tryout at the Majestic, Boston. Here are the details of cast and production:

And here is the full March 14 review of the tryout:


I shall return to the cast list for this ill-conceived and poorly received production after a brief review of the short-list of possible real-life originals for Doyle's creation, IRENE ADLER.

Five, including Lily Langtrey and Sarah Bernhardt. are dealt with on Sherlockian.Net here (scroll downpage a little):

In addition, scholars Joanna and Catharina Polatynska have, very convincingly posited Helena Modjeska and the reader is urged to read this Wikipedia link on a remarkable candidate:


Drawn as I am to Modjeska as a probable original Doyle may well have seen, she is not 'the woman' for me.


Above is an oil painting done on the film set of The Great Caruso, the 1951 biography of one great tenor starring another: Mario Lanza. It was painted by a lady member of the cast. Two years later she played Irene Adler on stage opposite Basil Rathbone.

Listen first to the voice if you will...of Jarmila Novotna:

1. 1946 in The Merry Widow for her close friend Franz Lehar:


***Bless you, Youtube...and all who sail in her, for making the rare so easy to find and enjoy.

I know nothing more of Novotna's Adler than may be found in the '53 review. I doubt she was riveting in that production..but neither was Basil Rathbone. And I began by illustrating the large element of luck in securing lasting fame  - the fortune of being in the right production, in the right medium, at the right time.

Who knows what Novotna would have made of Irene had better opportunity arisen? I like to think I do.

She was that rare combination - a great singer, a great actress and an astonishingly beautiful woman. My God, could she sing. How vivacious she is in the Hoffmann gem.

Read by all means this very informative piece from the internet but do so listening to a voice that loved life and gave it in spades to others from 1907 until 1994:

The description of Novotna's retirement is worth quoting:

"In total, she sang seventeen seasons with the Metropolitan, retiring from the operatic stage in 1956. Novotna had married  Baron George Daubek in 1931, and given birth to two children, Jarmilina and George, Jr., and decided the time had come to devote her remaining years to her family. In social settings, Novotna rarely spoke of her operatic career, preferring to be known simply as the 'Baroness' Daubek. Many people had no idea who she had been, and she preferred it that way. Novotna continued to perform, though, and was heavily in demand for recitals. She was also a frequent guest on many radio and television programs.
Novotna was universally known for her kindness, legendary tact, and ladylike demeanor. She made it a point to never criticize other singers; once, when a colleague was in vocal trouble, she was heard to remark, "Singing is so difficult, I wonder why anyone attempts it."


In noting the similarity in approach to retirement and their shared kindliness I do not of course propose Jarmila Novotna in any way to be Doyle's original inspiration for 'Irene'.

What then you may wonder may possibly justify such a high estimation based on three unrecorded performances over two days in a play the reviewer concludes 'will not satisfy Doyle addicts'?

Well...(he smiles) I rather warm to the parallel with Irene Adler herself - of whom we see and hear precious little (a few words, a letter and a fleeting moment of street theatre). If the woman can be extrapolated from such sketchy evidence...

And so I leave readers with still images of the lady who could paint in oils an empty set and bring to vibrant life (in a theatre of the mind) a minor character from a short story who was so well drawn in 1891 that she has acquired the most astonishing fame a century later. 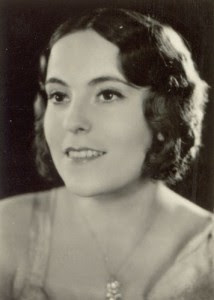 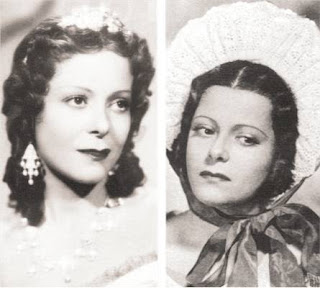 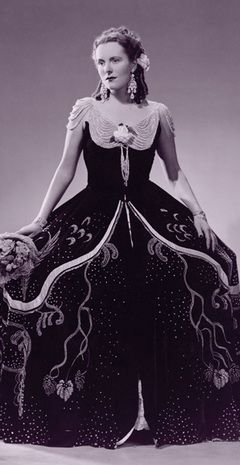 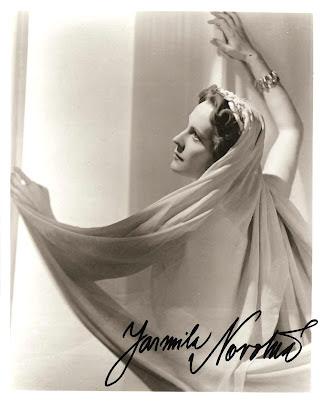 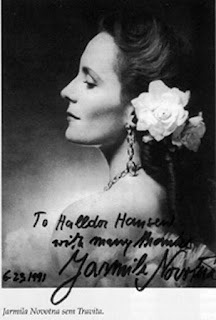