A Fable For Our Times.

Once upon a time in a faraway land those charged with the protection and governance of its people, noticed that the few citizens with access from an early age to eggs (which were very expensive) lived richer, happier and more productive lives than everyone else.
In their wisdom therefore, and with the simple altruistic motive of making life better for all, they determined eggs should henceforth be given freely on a regular basis to all the nation’s young. So persuaded were they of the beneficial effect of eggs, that the law made attendance at one of the many conveniently-sited new egg farms compulsory.
Those far-sighted leaders proved right and they were gratified to see so many enthusiastic and skilled practitioners enriching their own quality of life in the profession of eggucating children.


No one minded what kind of eggs were available (not the government, not the farmers, not the children). All eggs were equal as potential sustenance. The children responded to the wide variety and farmers became adept at displaying just the right egg for each child at the right time, knowing that should a duck egg prove uninspiring or indigestible, a plover’s may change a young life for ever. Such was the panoply of types, sizes and colours, so empathic were the farmers in their caring, careful disseminations that eggucation came to be valued as an end in itself, the keystone of civilization.

And the children lapped it up. In those days, you could do what you liked with eggs. The farmers positively encouraged experiment. If you felt the urge to eat, your farmer was versed in every way of cooking: poached, boiled, scrambled, fried sunny side up or down. Every new egg was a mysterious gift of nature and the world into which you were born; farmers were knowing companions (not overseers); helpers in hatching; shepherds of revelation.
Myriad were the ways to drink from this Horn of Plenty.. Many happy hours could be spent counting, making patterns, taking eggs apart, drawing them or seeing how far they could be thrown and whether some bounced. Farmers noticed a natural, unforced improvement in child literacy as eggs were discussed. Expression, grammatical construction and vocabulary blossomed as children read books about all sorts of eggs and wrote eggciting stories. Prized was the egg a child brought in that he or she had found outside the farm. Both egg and discoverer were accorded great respect and everyone’s attention.

And every egg and every child was heard to sing its own natural music.


Nourished on such a diet, moments of magic might be observed on many a farm with quiet satisfaction as farmers sensed the ebbing of their tidal influence... for children were creating and incubating of themselves eggs such as the world had never seen or could imagine.

Governments came and went (as governments do) and a few generations later there came to power some people who proclaimed that some eggs (to be precise, white ones) were superior to all others. A decree went out to all the farms that, henceforth, only eggs on The White List (poised for distribution) were to be supplied.

Concern was expressed in some quarters but this was allayed or suppressed by strident voices arguing there could be no argument against offering only the very best to all children.

When The White List was published, it was found to contain lengthy clauses, academic citations and addenda that detailed and justified precisely what was to be done with White Eggs on every farm in the land. The longest (by far) was the section entitled “Creativity” headed by an explanatory note reading :

“ Your government places particular importance on the Cultivation of Creativity if young people are to contribute usefully when they take their place in society and the world of work. So important is it that it cannot be left to grow wild and undirected.Farmers will find the “Creative Interventions” programme set out below ( drawn up by the country’s top Eggademics) focussed, comprehensive and applicable at all egg-grades.
The decree writers are convinced Farmers’ Unions will welcome this clear, informed guidance which will take a great deal off the shoulders of our hard-working farm hands. and ensure EVERY child receives exactly the same BEST egg, as a natural right.”

Not long after the new directive came into being, some children reported receiving White Eggs with no yolk, or no albumen, or both.

Farmers were hauled up before government inspectors who demanded to know what they were doing that made yolks disappear.Elsewhere, Head Farmers found “Eggstra Guidance” pamphlets in their in-trays, offering in-service training in “White EggShell Farming .“
Such was the battery of edicts raining down from above, that the skies darkened over many a farm; eggs were seen to turn grey or go prematurely stale.

Farm hands inexorably retreated into opposing camps. There were those who (desirous of advancement or fearful of disapproval and dismissal) persuaded themselves that grey eggs were still pure white and insisted likewise to their children. Others (stronger or more reckless) smuggled in forbidden eggs until Closed Circuit Eggavision left no hiding place.
*****
While skies were at their darkest the powers- that- be, scenting triumph, moved to complete the Eggolution. Egg production was in permanent decline with no market for any colour but white. Even these had (unaccountably) become prohibitively expensive. Any farm that could still afford them (the government had devolved purchasing long ago) was privileged indeed.

Frantic Head Farmers grasped the proffered help from above which came in the form of a curt circular:
“Your leaders appreciate the current perceived difficulty on many farms relating to a steady supply of affordable quality egg. and are delighted to announce that a very favourable rate has been negotiated in a public-private partnership with Universal Eggsports to supply their cutting-edge, high grade ‘Eggyfeed’ which is guaranteed to release the right nutrients to every child, according to their National Egg-Grade.

Farm hands, as such, will not now be needed, the process having been automated. As Head Farmer you will be required to stay on to maintain the equipment UE will install along with the first term’s delivery of ‘Eggyfeed’.”
*****
Time passed.

The skies remained a uniform grey.

It had no shell, no hidden mysteries within.

It was an amorphous porridge of uncertain origin, mass-produced that was said to taste of egg.

But no one really knew if it did.

For there dawned a day when hardly anyone left alive remembered what real eggs tasted like, or looked like. Most did not even know they had ever existed.

“What is EGG?” asked a child of her great-grandma one grey day.

“Grandma. Why are you crying?” 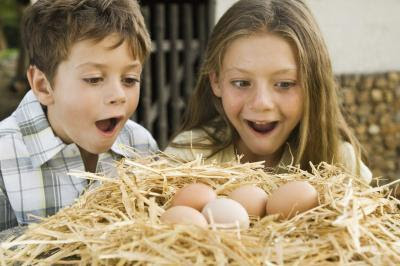 Please click LEARNING BY HEARTS to go straight to the next Education post.
Posted by Altamont at 11:49 AM