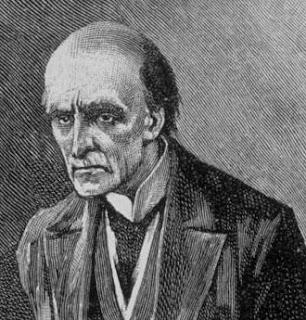 In this second post occasioned by the BBC "Sherlock" I want to begin to address how a third and perhaps subsequent series may develop, bearing in mind the precedents set by series 1 and 2...and Conan Doyle's original stories.

As Holmes' Boswell and Sherlock's Blogger, John Watson is naturally closest to reader and viewer. Our very familiarity with him renders him famous but not in the way of legend.

Conan Doyle's Holmes is sufficiently remote to attain legendary status. Typically, the lion's part of a Doyle adventure will offer the reader relatively little of Holmes. " A Study in Scarlet" being an extreme example.

While this remoteness is more difficult to create in visual media, the Jeremy Brett series dramatised the stories of those who came to Baker Street for help (often employing flashback) to minimise direct experience of Holmes, thereby maintaining a sense of his legendary image. The BBC Sherlock offers more of the detective than I think has ever been presented (except for Brett's two-hander stage version).

Similary, Jim Moriarty, Irene Adler and Mycroft Holmes are thrust so far to the apron of our imagination's stage that they are rendered less remote, endangering their status as figures of legend. I shall return to these.

Aspiring writers need look no further than Shakespeare for masterclasses in the art of dramatising legend. Indeed, it is a major theme of "Antony and Cleopatra". So confident is he by this point in his creative life that he revels like a skilled magician in effortless alternation between images of Cleopatra and Mark Antony as distant legends and as all too human tragic figures. The play begins and ends with descriptions and evocations of golden legend. The intervening acts take us right to the mortal hearts and minds of two lovers.

What Shakespeare teaches above all is the dramatist's awareness and discipline in keeping a character off stage to elevate them to legendary levels. Others may speak of them ( as Enobarbus of Cleopatra on her barge) but we encounter them directly only, as it were, in epiphany.

The Ghost of Hamlet's father is thus presented - the personification of a Golden Age. And I once saw Fortimbras played (appropriately) by the same actor as the Ghost. Fortinbras enjoys minimal stage time in order to lend dramatic credibility to the last scene's image of him as the ideal warrior king...precisely what Old King Hamlet was and what Prince Hamlet becomes only in death.

Conan Doyle's presentation of The Woman, of the secret brother Watson  has never met, of the unseen spider at the centre of his malignant web is as carefully wrought as Shakespeare's figures of legend.

With that preface I now turn to "Sherlock".

In the Jeremy Brett series, Mycroft appeared (forgivably, given Brett's health) more often than Doyle intended. His shadowy presence in the original stories serves to enhance and rebalance the legend that is Holmes.

In the BBC Sherlock, by choice rather than necesssity, Mycroft is a familiar (if ambiguous) figure. The more so in being played by one of the series' creators. Fortunately, The Reichenbach Fall leaves enough unanswered about Mycroft to sustain his legendary status - if the writers' so choose.

I am one of the many who rather hope we have not seen the last of a spell-binding creation.

However, in the context of this post's theme, it is clear the familiarity of 'Jim' and character elements reminiscent of Graham Norton and the more psychopathic Bond villains (I'm thinking especially of Klaus Maria Landauer's Largo) are taking Moriarty light years away from Doyle's remote legend.

Doyle, himself, only, I believe, engineered face-to-face encounters of Moriarty and Holmes in "The Final Problem" because they (and  the whole Holmes saga) were to end..for good. In reviving the detective, Doyle had perforce to make do with the second most dangerous man in London, Col. Sebastian Moran, as a replacement adversary. As Holmes himself was wont to remark, crime had become pedestrian now the Professor was gone. It was the invisiblity of Moriarty that secured his legendary status. A re-reading of T.S. Eliot's Macavity poem says all this better than I. (see my Poetry of Sherlock Holmes post) 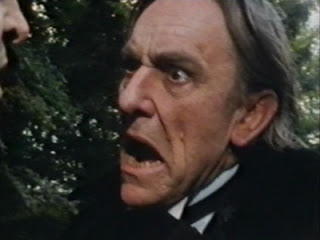 I enjoyed Jim Moriarty very much in Sherlock; but other Moriarty's have frightened me more. I prefer the encounter Brett endures with Eric Porter at 221b. even to the swimming pool scene in Sherlock. And I admire the way Porter's Moriarty is presented on the railway chase and seen at a distance in the Alpine scenes...a raven-like figure, haunting, relentlessly pursuing out of the blackness from which he has emerged to remove the One who has inconvenienced him once too often. Here is real menace; in Sherlock I am finally presented with a psychopath. Jim Moriarty is the weaker because of this, for psychopaths are no equal for Sherlock Holmes.

But is it Jim?

Cards on the table - it is still possible ( and I hope proves dramatised )  that Jim Moriarty still lives.If the writers can credibly fake Sherlock's suicide, the same may be done with Jim's.

Indeed, if the franchise is to be extended well beyond three series, the writers may need this worthiest of adversaries spinning ever more webs and constructing more illusory Chinese boxes to confound all but Sherlock.

I simply did not believe Moriarty as a psychopath, still less as a suicide. In fact, I found the whole scene on Bart's rooftop impossible to swallow. There is (I trust) a greater game being played.

The possiblities are fascinating. The suicide could turn out to be Jim-look-alike,  psychopathic, out-of-work actor, Richard Brook,  groomed by Moriarty for just this final role of his life.

Even, perhaps (though this may necessitate a change of actor) we have never met James Moriarty...yet. Jim has, from the swimming pool onwards, been Brook, revelling in playing the great Napoleon of Crime...believing at times that he was the shadowy Professor. There would be real genius and cold inhumanity in a Moriarty who used the weak and vulnerable to his own ends. Psychopaths are expendable...and (dramatically speaking) I agree.

My next post will concern John. For the moment I leave the last word to Shakespeare.
If Moriarty is truly dead:
" the odds is gone,
And there is nothing left remarkable
Beneath the visiting moon."
(Antony and Cleopatra, 4. 15) 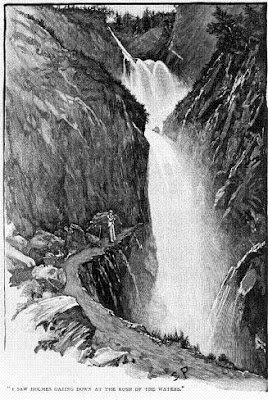