SHERLOCK - The Empire That Declined to Fall 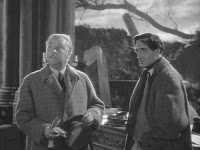 It is with a heavy hand that I take up my pen to lament the late Jeremy Brett was not able to complete the Canon. Of those unassayed, perhaps the saddest omissions are A Study in Scarlet and His Last Bow, the bookends (as it were) to the chronicles between. Such is life...and it is our good fortune that the BBC SHERLOCK has done justice to the first and Basil Rathbone's Holmes bows out with such dignity in the 1942 House of Terror (though neither production retains the original time period Brett would have inhabited).


Cumberbatch and Freeman have plenty of precedent for up-dating their characters. Doyle, himself, ages Holmes in the 1917 publication so that, at 60, he no longer stands sentinel over a fog-bound, gas-lit London of hansom cabs.  He is delivered to meet Von Bork in a Ford car, passing the German Mercedes on the way -a telling image both of the new order and the looming threat.

Holmes is out of his time; but time itself is out of joint.

A desperate plea from the Prime Minister recalls the detective from retirement to duty - an onerous duty involving 2 years undercover, infiltrating the Kaiser's network of spies in Britain.

25 years later, the spirit of Sherlock Holmes is invoked again and the final talismanic sentences of His Last Bow are uttered once more. Rathbone's performance renders the moment near-mythic.Precisely right.

As the author of Sir Nigel and other historical romances close to his heart, Doyle subscribed to the chivalric code. Legend has it that King Arthur but sleeps and will awake to arms whenever Albion is in peril. He would approve of Holmes - in his sense of public duty and in the manner he treats the defeated Von Bork. For, while the German agent vents his spleen until exhausted, Holmes displays a firmness tempered by gentlemanly (knightly?) politeness. This is the British way - the civilised way.

Brett would probably have eclipsed Rathbone in this, for he is the most civilised Holmes I have seen, a dimension signally lacking (as yet?) in Cumberbatch's Sherlock. This is not the same as awareness of class. Brett's creation rightly reflects the nature of late Victorian society. Precisely because of this, Holmes' complete lack of deference to those in authority is the more dramatic. From the owner of Silver Blaze to the Duke of Holderness, from the bank manager in The Red-headed League to The hereditary King of Bohemia, Holmes places truth above rank and gives short shrift to arrogance and stupidity.

He is, in this sense, more than 'the highest court of appeal in detection' - this most serious of jesters maintains an independence that saves nations. Lord Bellinger, the fictional Prime Minister in The Second Stain, achnowledges this. He realises there is more to the lost letter's recovery than meets the eye, but equally that Holmes commands the nation's total trust and gratitude. He does not press him further when Holmes replies, "We also have our diplomatic secrets".

At root, Sherlock Holmes is a personification...and a beacon...of civilization. These are the qualities we may, with confidence, fall back on in troubled times.

Now it's true there is something of this in Cumberbatch's creation, but he has not yet convinced me that John could readily refer to him as 'the best and wisest man I have ever known'. Or that he can save nations.

This has nothing to do with the modern setting. As with Shakespeare, there are superb up-dated versions and abysmal ones.I have no quarrel with modern settings for period stories. Themes are the flesh and bone of literature: their outward garb is as insignificant as a man's appearance to his inner qualities. The creators and I are having great fun with Sherlock in 21st century London. And I'm happy to stalk with Basil Rathbone in the mid-twentieth. These time zones may co-exist with Victorian London. But it must be observed that the Holmes of that Empire and the London of that Empress are the rock-solid foundations to later 'cloud-capped palaces'.

As early as 1932, Vincent Starrett was writing (in The Private Life of Sherlock Holmes):

So they still live for all that love them well;
in a romantic chamber of the heart,
in a nostalgic country of the mind,
where it is always 1895.

A mere 37 years on, but 'All changed, changed utterly' by the East wind of The War to End All Wars. Seven years later Groundhog Day, the Second Coming of tyrannic power. Yet again 'the blood-dimmed tide is loosed' and 'once more into the breech'  the empire strikes back and 'the ceremony of innocence' vanquishes 'Mere anarchy'.

The 'Empire' of Doyle's poem implies more than British imperialism (which was, in any event, already declining, slowly, naturally). Our laugh is the laugh of defiance from the good-natured Innocent, who courteously, but firmly, rejects the invitation to surrender. "Who do you think you are kidding, Mr. Hitler?". Dad's Army makes the point far better than I.

It is clear at the close of 'The Reichenbach Fall' that Sherlock declined Moriarty's prompting to fall. He lives to fight another day, but time will tell whether this modern incarnation will 'fight the good fight'  within and beyond his fictional existence. Only thus may Cumberbatch secure a place at the Round Table in the chivalric Order of Great Sherlocks.