SHERLOCK - The One Fixed Point in a Changing Age. 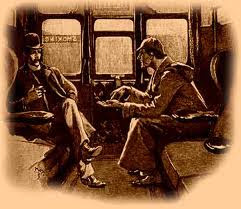 "A confederate...to whom each development comes as a perpetual surprise, and to whom the future is always a closed book, is, indeed, an ideal helpmate."
(Holmes on Watson in "The Blanched Soldier".)

And, one may add, an ideal representative of the reader resident within the narrative of a detective story. As a rule, the reader knows what Watson knows. First person narrative and blogging are forms of soliloquy - and lies have no currency there. Watson embodies the fiction's truth. He is no Moriarty. Decently, earnestly, sympathetically and humanely he relates the best sense he can make of complexities beyond him. "The one fixed point in a changing age" (Holmes of Watson in "His Last Bow"), it is that quality of stalwart loyalty to "the best and wisest man I have ever known" that makes it easy to like him.

The quartet of great screen Watsons generate affection thus, though differing markedly in other respects.

In this, the 3rd of my posts on the BBC Sherlock I shall look at Martin Freeman's portrayal in the light of the memorable Watsons of Nigel Bruce, David Burke and Edward Hardwicke. 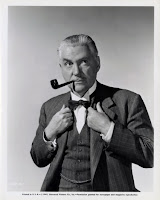 Clearly, Bruce and Freeman are poles apart. An instructive (and amusing) flight of fancy is to let yourself imagine Bruce's Watson coping with Lara Pulver nue. Nuff said.

Bruce has none of the painful introspection of Freeman's John. But..he looks good in monochrome in the mists of Dartmoor or the swirling London fog, hanging onto Rathbone's coat-tails. Great voice, fun to mimic.No depth - just great entertainment.

Jeremy Brett's first Watson, played by David Burke, has a mind and life of his own. This often makes him sceptical of Holmes' powers and even critical of his methods. Here is no bumbling caricature but a decent, engaging, intelligent creation capable of moving us deeply (in "The Final Problem" and, for example, less tragically, in the final scene of "The Resident Patient" where Burke's Watson realises Holmes has suggested the best title for the case.) A delight...and one of many set-pieces between two actors at the height of their powers. One can readily imagine these two setting out to dine together, equals in everything that really matters.

There are rare moments with Burke (and later with Hardwicke) where Brett's Holmes calls him "John". Thus, in a word, is dramatised their unmistakable  mutual respect and affection. 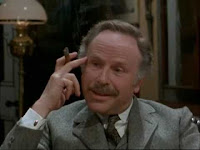 Hardwicke delivers a masterclass in the simplicity of great screen acting in a role made more difficult as time went on by Brett's state of health.
Art begins to imitate life and one senses the stalwart support of actor for actor in the characterisation. Hardwicke is older than Burke. This feels right for the post-Reichenbach Holmes...and the fading Brett.
I take my hat off to him for the actual and imaginative constancy displayed.

In "The Empty House" Hardwicke is initially shown alone, taking on post mortem cases on behalf of the Yard, surviving without his dead friend. Surviving, but we feel the loss in his understated response to mention of Holmes by the police in the case of Ronald Adair. What is a classic reconciliation scene is rendered deeply moving by Hardwicke's performance when the bookseller becomes Sherlock Holmes. We are home from Oz; miracles happen...and the old team set out once more into the London night. These are immortal, legendary moments - The game's afoot...but it's only fun if both Holmes and Watson play. 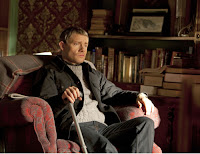 There is some tribute I feel to Hardwicke's Watson in Martin Freeman's John.But then, I also detect shades of Alan Cox's Watson in the 1985 feature film, "Young Sherlock Holmes". Freeman and Cumberbatch are young for the parts and (in these early series) feel like Nicholas Rowe and Alan Cox some years on.

Bur this is Freeman's Watson..and what a Watson!

We probably spend more time with John than any other Watson. In turn, he has more to do with Adler, Moriarty and Mycroft than previous incarnations. Indeed, by the time we face The Reichenbach Fall one might forgivably retitle the series, "John".

I shall be writing about Cumberbatch's portrayal of Sherlock in the next blog but make the point now that John's character is much more developed and complex than  is the detective's at the close of series 2.
There are aspects of Holmes as yet unasssayed I put down to Sherlock's comparative immaturity.

Watson has seen much already, perhaps too much for one man's life. He feels, has felt, too much. This is a riveting creation, graced in the opening and closing scenes of The Reichenbach Fall by some of the best small-screen acting I have ever seen.

For the first time I readily believe in Watson the retired soldier. I understand the need to write. I warm to the need for enduring friendship (as opposed to the premature loss of comrades in arms.) I see (as Sherlock susses) the need for excitement and danger in John - it's all he knows. In psychotherapy and in  private eulogy Freeman is Everyman Bereaved.

Such sincerity, such emotional truth exacts great pressure on the writers of future episodes. Having established such depth directions must be found that do justice to John's existential loneliness.

My next blog will look at how Cumberbatch may develop Sherlock the more readily to seem worthy of this man's friendship than he does (for this viewer) at present.
Meantime, I look forward most of all.to the scene that must reach our screens eventually - when Freeman's John encounters the living Sherlock of Cumberbatch. What a feast in the offing!

Finally for this post - just a few more possibilities to anticipate with relish.

Greater focus on John as a medical practitioner - he is young and, surely, must find gainful employment and a life of his own.  From "A Scandal in Bohemia" onward, Doyle's Watson had a (variably busy) practice.
This worked well as a technique to give Holmes space to travel, work in secret and sustain a certain distance and aloofness from Watson and, hence, the reader.

John as husband - Doyle's Watson marries twice. If the BBC Sherlock is a long term project a Mary Morstan for John is a reasonable development. Think of the fun with " silly Uncle Sherlock" when, inevitably, the kids multiply!

Seriously - I just hope the writers can maintain such a level of writing as to ensure:

a) that John may develop credibly, building on the rich characterisation thus far;

b) that, as a result of a) Martin Freeman continues to be interested in Project Sherlock.